Over the weekend, Commonwealth Bank Matildas Head Coach Tony Gustavsson announced a travelling squad of 25 players to commence the final stage of Australia’s preparation for AFC Women’s Asian Cup™ with one exciting addition marked to make her return.

New mum, Katrina 'Mini' Gorry, originally made up Gustavsson's travelling squad and although she was unable to answer the call for family reasons, Gorry is no less determined to don the green and gold ahead of the FIFA Women’s World Cup 2023™ on home soil.

When Tony told me I'd made the squad, it was a really, really proud moment

"I called my mum straight away and I was pretty emotional. I knew that I wanted to get back into the national team, but I didn't really know how quickly my body would recover [post child-birth] and if I'd still feel the same about football after I'd had Harper." 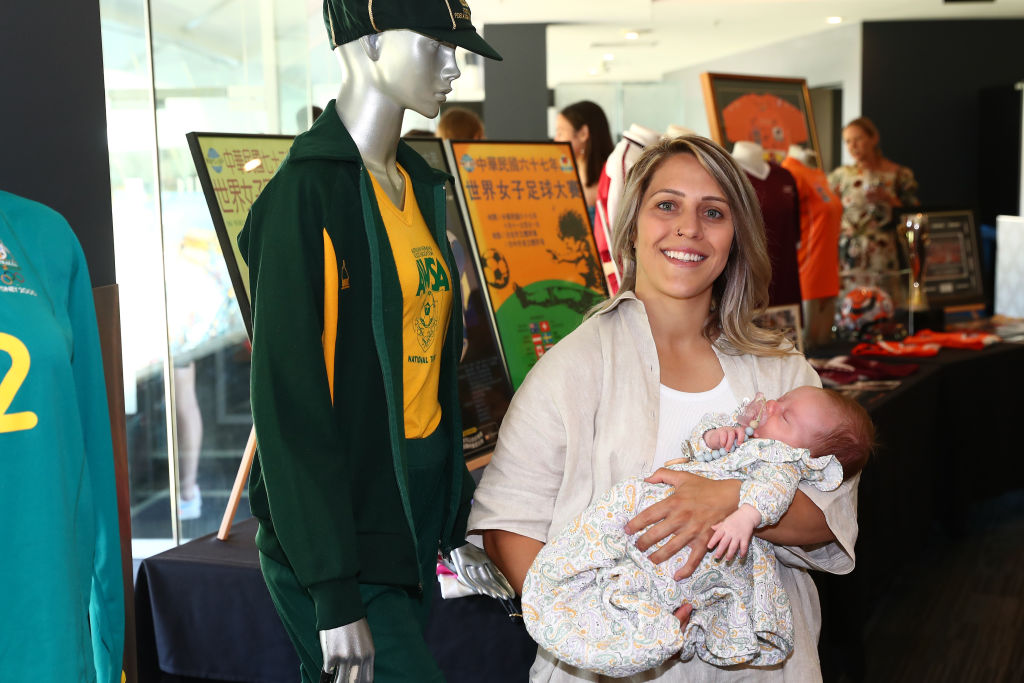 Gorry mulled the offer over and understandably decided that due to the current state of the world due to COVID-19, it wasn't worth the health risk to her daughter or herself to travel for the tournament.

"I'm sad that I won't be there with the girls but I know that I've made the right decision in keeping Harper safe because she is my priority. I would never forgive myself if something happened to her while I was overseas and I couldn't get her the help she needed," Gorry shared.

Despite giving birth less than five months ago, the tenacious midfielder is already getting back to her best playing for Brisbane Roar.

READ: Initial selections in for 2022 AFC Women's Asian Cup
MORE: Aivi Luik: "How can you say no to your country?"

Two weeks ago she helped her team to a 4-2 come-from-behind win, scoring a goal in the 86th minute, with an elated Gorry celebrating her first goal back with a fitting tribute to Harper.

"It's been really enjoyable being back on the pitch and I'm really proud of how far I've come and just how much I'm enjoying football again.

"I think pregnancy really gave me the opportunity to miss football and to fall back in love with the game. So, yeah, just loving every minute of being back out there," she said.

"That goal was super emotional. Obviously, I missed a lot of football by making the decision to have Harper, but it's really been the best decision that I've ever made.

"The amount of happiness, love and complete fulfilment that she's brought into my life is something that I really can't describe. Being back out on the football field and having her in the stands with me and coming to every training session, football is pretty much her job too," she continued.

"It was a special goal and I'm really glad that she was in the stands, cheering along with me."

Gorry is proof of the fact that women no longer need to choose between being an elite sportsperson or starting a family.

I'm really proud of what I'm doing and hope that I show other female athletes that want to have a family, that it can be done.

"Mentally and physically I feel the strongest I ever have and I really think that's come from the experience of pregnancy, labour and just being a mum. I think you find a new gear inside of you, because I've definitely never felt this way before.

"It's just all about pure enjoyment for football again, because before I had Harper I think I lost the love for the game and now I'm just completely enjoying it"

The 29-year-old says that future national team selection is very much on her agenda.

"National team is always on my mind. I'd love to put on the green and gold again," she said.

"I am pretty sad that I can't be at the Asian Cup, but, I'm just going to keep working my bum off and hope that I get selected for the next tournament.

"I  can't wait to be back with the girls and I know our time will come and they will all get to meet Harper," she continued.

"My goal is to get into the 2023 World Cup squad so I'm trying to build on every game and every training session leading into that, so I can put my best foot forward to be a part of that squad and to play at a home world cup."