​The Young Matildas have topped Group A after a resounding 7-0 win over Indonesia at the AFF Championships, with the unbeaten Aussies now looking forward to the semi-finals.

Coach Ante Juric made several changes to the starting side with another short turnaround after the tight win over Laos.

The move paid dividends from the outset, with the Young Matildas getting on the front foot early and never relinquishing control of the match.

A fine piece of build-up play resulted in Jordan Baker giving the Aussies the lead on ten minutes after her shot cannoned off the cross bar and over the line.

From there the flood gates opened, with Princess Ibini-Isei, Emily Condon and a second to Jordan Baker seeing Australia's U20 side 4-0 up inside the opening 30 minutes.

The half was capped with a superb piece of individual play from Alexandra Chidiac, who received the ball and beat several players before lashing a shot over the keeper's head from outside the area.

It was more of the same in the second stanza with some majestic football breaking down the Indonesian defence and the Young Matildas taking full advantage in attacking areas.

They were rewarded shortly after the restart when captain Olivia Price was found in the area with time to shoot and managed to slot the ball past the keeper to give her side a six goal advantage.

Moments later, Emily Condon was back on the score sheet with her second of the night after a strong run from the left wing to round out the scoring. 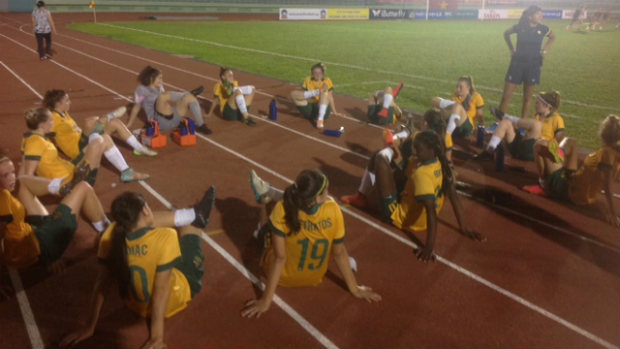 Coach Ante Juric was pleased with the improved performance from his side and singled out Alex Chidiac as a star of the future after another strong showing.

“This was an extremely good performance in response to a substandard game last time out,” said Juric.

“The girls were positive and played with lots of intent. They did not take the opposition lightly and played to the standards we have set ourselves in this Australian national team.

“All the players delivered, though I must say Alex Chidiac, one of the younger members of the team, is really taking the right steps in progressing into a future superstar in the women's game.”

The former Socceroo was thrilled his side took the maximum nine points from the group stage but warned against complacency having qualified for the semi-finals where they'll play Myanmar.

“Now with us moving into the last four against Myanmar and it gives the girls an opportunity to experience a game under the pressure of a semi-final.

“It is important to the overall development of the girls and our ultimate goal of qualifying for the World Cup in August.”