Westfield Matildas coach Ante Milicic believes his side is increasing their multi-faceted attacking threat following their dominant 6-0 win over Thailand on Monday night.

Milicic’s side were unrelenting in the win over the 39th ranked Thai team at Cambelltown Stadium, racking up 38 shots from their 74.4% share of possession to hold their spot atop the Group B standings in the AFC Women’s Olympic Qualifying Tournament.

Emily van Egmond led the returns on the scoresheet with her maiden international hat-trick, while Kyah Simon contributed a brace and second-half substitute Hayley Raso also chimed in with her second goal of the tournament.

While the final score proved emphatic, Milicic explained post-match that he is increasingly pleased with the variety in the Westfield Matildas attack – something he has sought to cultivate in preparation for this tournament.

“If you go back to the World Cup, we were very dominant and reliant on crosses, particularly from the right-hand side.

“Now, with the players that are available, we can go through central areas, we can still go through wide areas, we can pass our way into the front third, we can dribble our way, we can cross.

“We have worked a lot on the variations in that and, in the end, I am just pleased we are creating clear cut chances.” 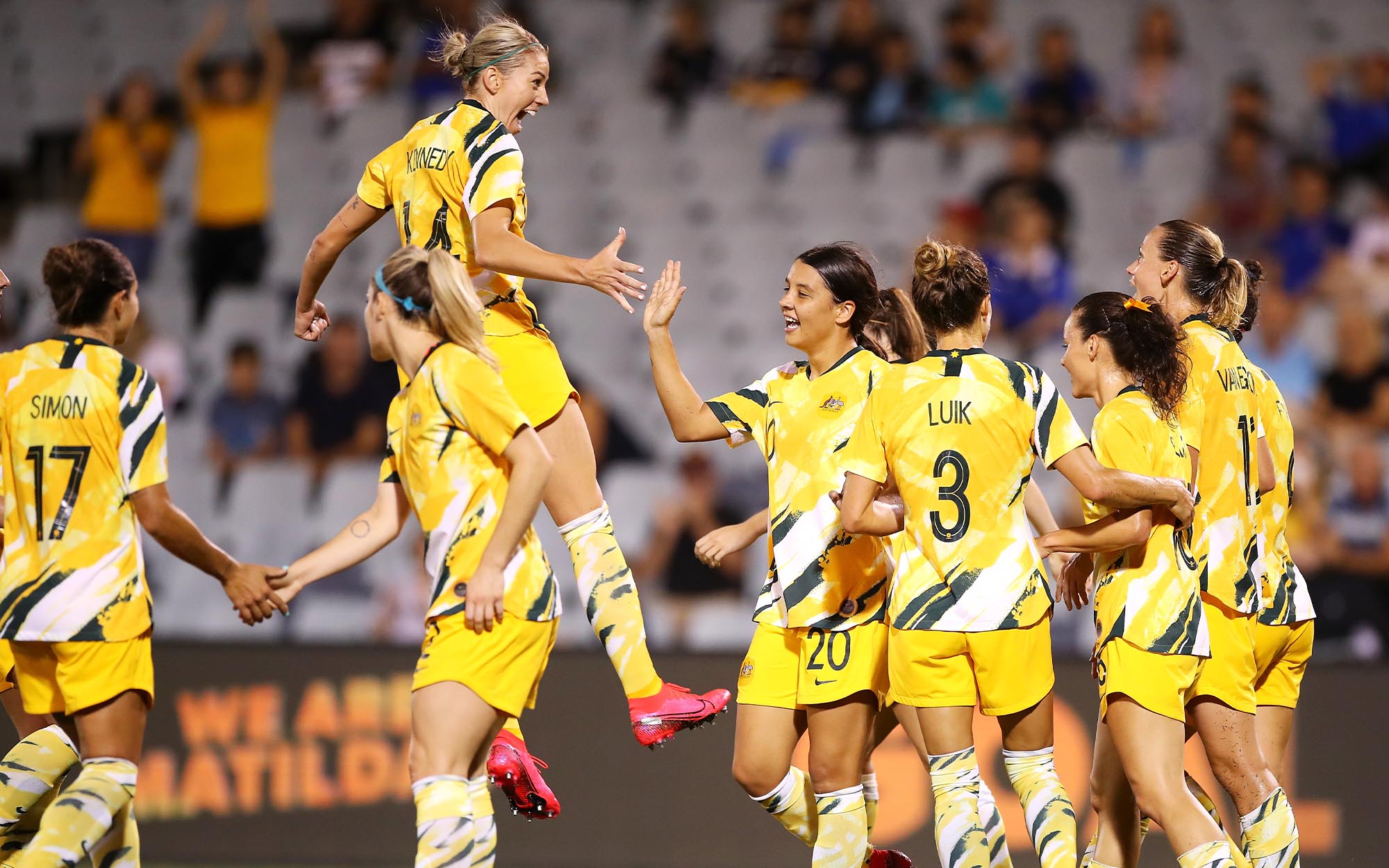 With Mackenzie Arnold starting in goal, the result also marked a second straight clean sheet for the team in the qualifying tournament, and Milicic believes it is a result of improvements in their transition from long periods of attack to defence.

“Obviously [we] dominated possession and created 21, I think, clear goal-scoring opportunities,” he explained.

“At the same time, it is not just about converting those chances and scoring but to keep a clean sheet is important [and] I think in the end [Thailand] had two penalty box entries.

“The transition phases when we had the ball was always going to be the worry for us, or the area where we generally need to improve on. I thought we dealt with that very well.

“Positioning was good when we had the ball, the organisation, the communication [and] I thought Alanna [Kennedy], in particular, was outstanding in that.”

The Westfield Matildas dominated the match from the get-go but had to wait until the 44th minute to find the opening goal as the stubborn Thailand defence scrambled away repeated assaults on their goal.

Despite the frustration in not finding the breakthrough earlier, Milicic said he thought the team handled the situation well.

“We just needed to be calm and composed. We knew it was just a matter of converting the chances,” he explained.

MORE: Tickets on sale for Matildas at Western Sydney Stadium in Parramatta

Milicic made six changes to his starting line-up from the side that dispatched Chinese Taipei 7-0 on Friday, and said he feels is understanding more about his squad’s performances in a tournament setting.

“You learn a lot about the players when they play games in a short space of time and I am still learning,” he added.

“I had a lot of takeaways from the World Cup in that department – who can back-up, who can play a couple of different positions, who can play against better quality opponents, who can be in a professional environment for that long and continue with high standards.”

With all but one member of the squad getting game time in the last two outings, Milicic said he feels he has an abundance of options ahead of the team’s final group assignment against China PR.

“Important for us now there has been an opportunity in two games where every player, besides Teagan Micah, has started a game,” Milicic said.

He added: “I am really happy with the loads of the girls coming into the China game so we are in a good position.”

Milicic's side return to action against China PR on Thursday, February 13 (kick off 7.30pm AEDT) at Western Sydney Stadium, Parramatta.

The top two teams in Group B will advance to a winner-takes-all, two-legged playoff – set to be played in March – for a spot in the Tokyo 2020 Olympic Games women’s football competition.

All three of the Westfield Matildas matches in this stage of Olympic Games qualifying are broadcast LIVE on FOX SPORTS, Kayo Sports, and the My Football Live App, before being shown ABC TV on a delay.