The Westfield Matildas made an impact on Match Day 1 of the Women's League Cup.

We wrap up the opening group encounters.

Alanna Kennedy scored her first goal for Tottenham with a trademark free-kick on the hour mark against London City.

The Westfield Matildas defender curled one into the bottom corner to put Tottenham 2-0 up, before being rested at half time ahead of a huge FAWSL match against Manchester United this Saturday.

Tottenham went on to win the game 4-0 with the Westfield Matilda subbed off at half time ahead of a big league fixture against Manchester United in three days time.

Next up for the Spurs in the League Cup will be Chelsea away from home.

In a re-match of last season’s League Cup Final, holders Chelsea hosted Arsenal at Kingsmeadow with the home side taking all three points.

Sam Kerr started for The Blues while Caitlin Foord lined up for the Gunners.  It was Kerr’s Chelsea that landed the first blow through captain Magdalena Eriksson in the 5th minute.

That signalled the start of what would be a high tempo, high intensity match between two of the top teams in England.

Foord continued her stellar start to the season as she brought Arsenal level in the 8th minute with a long range effort. 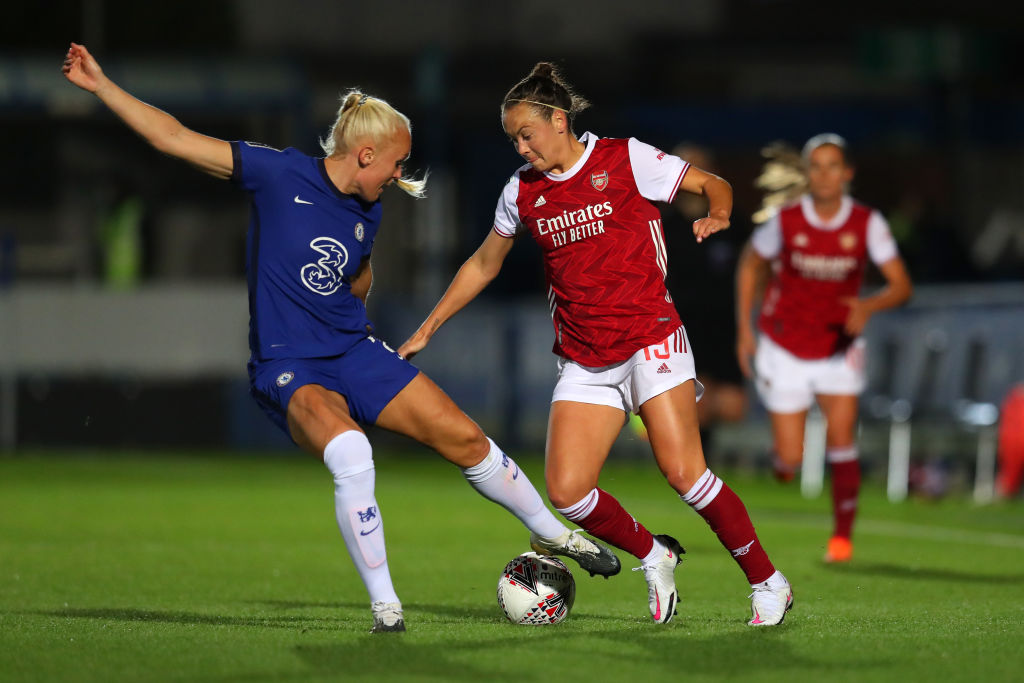 However a quick brace from Guro Reiten – with her second courtesy of a rebound from a Kerr effort – to give the Blues some space at the break.

The second half saw more of the same from the two combatants with Chelsea holding out the Arsenal resurgence before sealing the match late.

The win takes Chelsea to second in Group B and will meet Manchester City in the WSL next.  Meanwhile league leaders Arsenal will take on Brighton & Hove Albion.

Hayley Raso’s Everton were in action against their upcoming FA Cup Final opponents.  While the Toffees started brightly, they eventually fell to City.

Raso was unavailable for the match and did not suit up.

Chloe Logarzo also scored her debut goal for her club, with Bristol City sealing a 4-0 win against the London Bees.

Logarzo also made it 2-0 on the night, heading in a cross to net Bristol's second goal in as many minutes.

"It's nice to finally get a goal underneath my belt," she told the Robins media.

"It's been a hard three games for us so to be able get some confidence leading into the game on the weekend was essential for us."

Logarzo played the 90 minutes in the win, while fellow Australian Ella Mastrantonio was subbed off after 70 minutes for Bristol.

West Ham opened up with a 4-2 penalty shoot out win in Group D.

Emily van Egmond played the full match and converted a penalty in the shoot-out to give the points to the Hammers.

In a tight and tense encounter the Hammers opened the scoring through Rachel Daly before Brighton hit back with two goals.  Gilly Flaherty's late-leveller saw West Ham push the match to penalties where they prevailed.

A 4-2 penalty shoot-out win gives us two points to take back to east London after a 2-2 draw! #BHAWHU

Next up for West Ham is the red hot Everton.