Gustavsson has enjoyed a long and successful 21-year coaching career in both women’s and men’s football, having led a collection of clubs in his homeland, in addition to having played a significant role in two title-winning tenures with the United States Women’s National Team (USWNT).

The 47-year-old coach – who also enjoyed a 15-year professional career as a player – led Swedish club Tyresö FF (women’s) to a golden period in its history on the pitch between 2012 and 2014. Gustavsson helped the Stockholm-based side claim the Damallsvenskan in 2012, finish as runner up in Sweden’s top-tier for women and Cup the following year, and also steered Tyresö FF to the 2014 UEFA Women’s Champions League Final against German giants WfL Wolfsburg.

FFA Chairman, Mr Chris Nikou, welcomed Gustavsson to the role – one that will see him lead Australia in two Olympic campaigns (Tokyo and Paris), at the AFC Women’s Asian Cup in India in 2022, and significantly, at the FIFA Women’s World Cup Australia/New Zealand 2023™.

“We are delighted to have secured the services of Tony Gustavsson, who has been appointed following a robust and well-governed process, which was administered by a selection panel with strong football acumen and expertise in the women’s game and sport more broadly,” Nikou said.

“We would also like to highlight the Football Development Committee which was Chaired by Board Member, Remo Nogarotto, for the extensive process developed and the well balanced panel that was assembled in identifying the best coach for our Westfield Matildas,” he said. 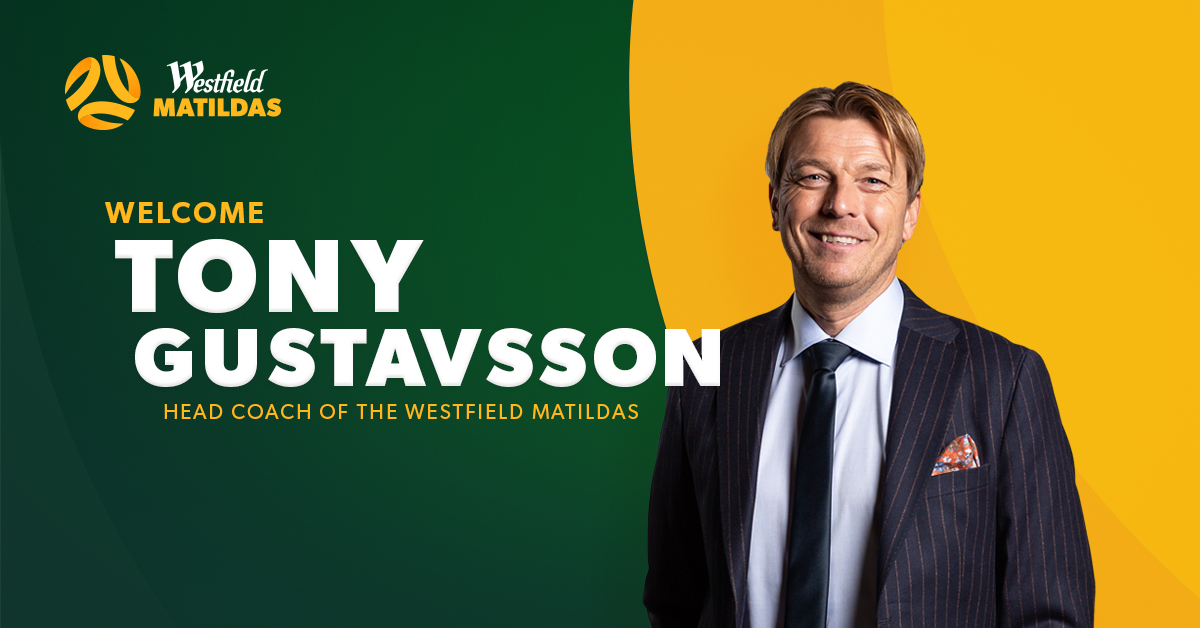 “Tony arrives at the Westfield Matildas and FFA boasting a wealth of experiences in the international game and a strong track record of success,” Johnson said. “Having worked closely with some of the best female footballers and coaches in the world and, through his time with the USWNT, he has developed an excellent understanding of what it takes to prepare for and perform in the intense, high-expectation environments of major international tournaments.  We believe that in Tony, we have appointed a coach who will not only surpass the benchmarks and criteria we set as an organisation, but the standards that are expected by our players, football community and fans.

“Throughout the process it was evident that Tony is eager to buy in to what we are working to build with the Westfield Matildas – an uniquely Australian team with a strong identity that is recognised as world class both on and off the pitch. We want to elevate our Westfield Matildas even further as a unifying symbol of the game to inspire all Australians, young and old. We believe that the combination of Tony’s persona and his experience make him the right person to help us do this. Importantly, Tony has also demonstrated a strong desire to positively influence the broader Australian football landscape by working closely with elite Australian coaches including Mel Andreatta, Rae Dower, and Leah Blayney to enhance their skillsets and help bring the next generation of female players through the development pathway over the crucial four (4) year period ahead.”

Gustavsson was formally welcomed to the role on Australian soil on Tuesday, visiting Australia House in London where he was met by the High Commissioner for Australia, His Excellency the Honourable George Brandis QC.

“I am extremely proud and happy to have been appointed Head Coach of the Westfield Matildas,” Gustavsson said.

“I feel that my 21 years of coaching have put me in the position to be ready for this.”

“It feels as if I have come to a moment where this is what I have been waiting for – to lead the (Westfield) Matildas for four years and also at the FIFA Women’s World Cup™ in Australia and New Zealand in 2023.

“I have always said that the Matildas have the potential to be one of the best teams in the world and that is one of the reasons that I wanted to get on board with this job. I have been in the pressure cooker a lot of times and in environments that demand success. These experiences will be beneficial as we do this together with the fans, the stakeholders, the players, and the staff as a team,” he said.

Gustavsson is currently employed as first team coach with Swedish Allsvenskan club Hammarby IF until the end of 2020. Subject to COVID-19, Gustavsson will oversee a proposed Westfield Matildas camp in Europe in November 2020, however he will formally commence his contract with Australia on 1 January 2021.