Four Aussies claimed Domestic Cup trophies over the weekend, with Chelsea and Fortuna Hjørring winning in their respective finals.

Sam Kerr and Hayley Raso found the back of the net, while FC Rosengård and San Diego Wave FC extended their unbeaten streaks.

Starting things off in England, Sam Kerr and Alanna Kennedy lined up for their sides in the Women's FA Cup Final at Wembley Stadium in front of 49,094 cheering fans.

Kerr looked to be through for the opener, expertly going past City keeper Ellie Roebuck in a one-on-one challenge, however, the offside flag denied the striker's attempt to give Chelsea the lead.

The reigning Women's FA Cup Champions wouldn't have to wait long for the go-ahead goal, Millie Bright's cross-shot finding Kerr at the back post to nod Chelsea into the lead.

Chelsea was only able to hold onto the advantage for just nine minutes, with Lauren Hemp finding the equaliser for Manchester City to send both sides in at 1-1.

Erin Cuthbert took back the lead for Chelsea, with her strike hitting the underside of the crossbar.

Hayley Raso then entered the game for City, looking to claw back an equaliser for Manchester and she did exactly that. Alex Greenwood sent a perfectly weighted ball over the top, which Raso controlled with her chest and muscled her way past the Chelsea defence to put the game back at 2-2 in the 89th minute and send the game to extra time.

Kerr eventually found the match-winner, making a run towards goal with only centre-back Alex Greenwood and keeper Roebuck in her way with Jessie Fleming also joining in attack as an option for the striker.

The Aussie fired her shot just as she made her way into the box, with Greenwood, caught in between cutting down the pass to Fleming and trying to stop Kerr from making a shot, the ball hit the City defender and ricocheted into the back of the net 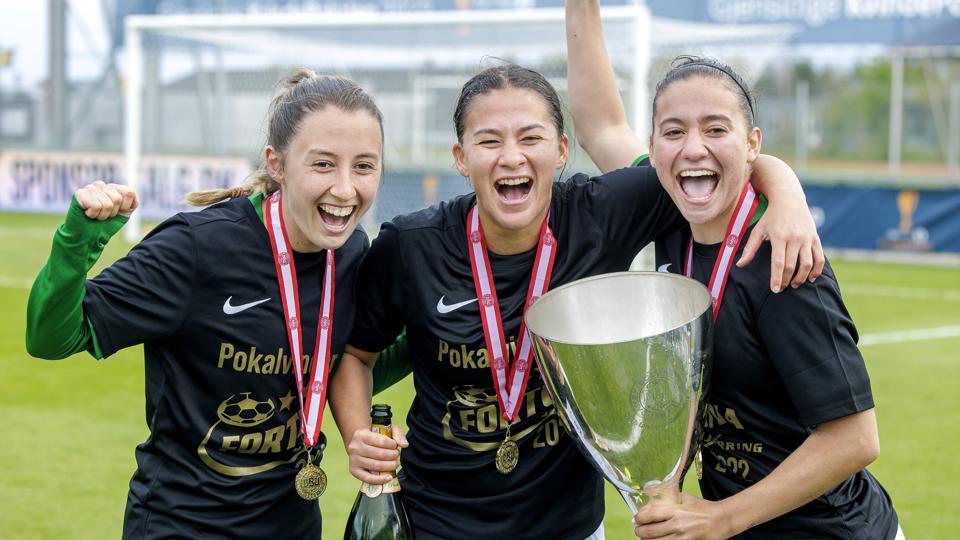 Fortuna Hjørring' Aussie trio all made the start, with goals to Camilla Larsen, Signe Hansen Baattrup and Olivia Holdt sealing the win.

Moving over to midweek action in Sweden, Clare Polkinghorne and Katrina Gorry both started for Vittsjö GIK as they faced Kalmar, ending in a 1-0 win for Vittsjö GIK.

Vittsjö's second game of the week saw them host Piteå, with Clara Markstedt sealing a 2-1 win for the hosts as Vittsjö moved into fifth place.

Hammarby was looking for their third win of the season when they took on IF Brommapojkarna. Courtney Nevin made the start and played 76 minutes in Hammarby's 2-0 win. While fellow Aussie Kyra Cooney-Cross is still eagerly awaiting her debut.

Meanwhile, Remy Siemsen's AIK were looking to climb off the bottom of the table when facing Eskilstuna. A 17th-minute winner for the hosts saw AIK face their seventh defeat of the season.

Siemsen went close to equalising in stoppage time, however, is still searching for her first goal with her new side.

Over in Malmö, Teagan Micah and Charli Grant's FC Rosengård were aiming to extend their unbeaten streak to eight and maintain their spot at the top of the table went they host Kristianstads DFF.

Micah started for the home side, with Sofie Bruun Bredgaard opening the scoring for Rosengård in the 36th minute.

This draw sees Rosengård move to second on the table.

Moving over to the USA, Chloe Logarzo's Kansas City played out a 2-2 draw with Orlando Pride. Logarzo is still recovering from her ACL injury but is making promising signs of returning for the Current this season.

Alex Chidiac was named on the bench in Racing Louisville's 1-1 draw with Houston Dash, the Aussies still awaits her NWSL debut which could come on Thursday morning against fellow Australian Emily van Egmond.

Meanwhile, Emily van Egmond's San Diego Wave FC extended their winning streak to three to take over first place on the ladder with a 2-1 win over the Chicago Red Stars.

Van Egmond has played every minute in Wave FC's last three wins, with goals to Alex Morgan and Kaleigh Riehl sealing the win.

Our last stop takes us to Italy, where Aivi Luik and Ella Mastrantonio's Pomigliano C.F avoided relegation with a 3-1 win over Napoli.