Defensive leader Alanna Kennedy says her partnership with Laura Alleway in the centre of Australia’s defence is growing in confidence as the team looks towards its first hitout in Brazil ahead of the Games.

After over two weeks in Brazil, Australia face the talented Brazilians in a friendly this Saturday (Sunday Australian time)

It’s a hitout Kennedy sees as important more for game time than anything else with their last games being against New Zealand in Australia last month. 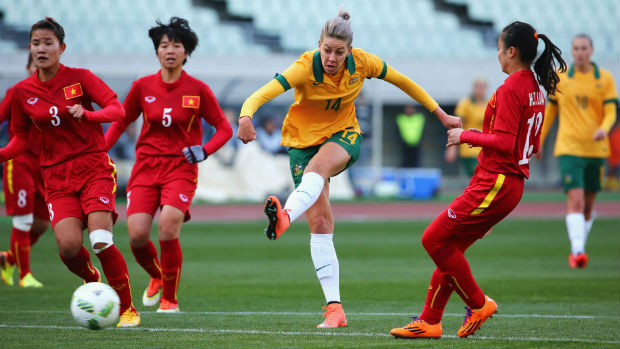 “Our confidence has grown and the partnership Loz [Alleway] and I have has grown as well,” she told FFA TV in Fortaleza as Australia prepare for the clash with host nation Brazil on the weekend.

“Whether it’s her and I that play at the back or anyone else we’re confident we can break down any attack, and that’s starting from the front all the way to the back.”

Kennedy added: “I arrived a day or so after the girls, coming from the US. Apparently it’s winter her but it’s nice and hot.

“It’s a little bit different to anywhere we’ve been. We’ve got a few more boundaries but it’s good to be back with the girls.”