"Dylan is my world, and I wouldn't change anything about him"

My little brother Dylan. Where do I start?

He is the superhero of our family. From the moment he was born I knew that he was special because the way he entered into the world made my Dad and Step Mum smile.

I come from a big family and have always loved kids.  For many years I begged my Dad to have another baby just so I could mother them.

Pretty much from the day Dylan was born, I carried him around like he was my own. I would always ask to feed him, put him to bed and for some reason would happily change his nappy. Before too long he was about the size of me, but I still always wanted to just carry him around and teach him new things.

READ: "We were starting to build something pretty special as a team" Gorry remembers a special 2014

WATCH: Generations of Australians - The Catleys

When I spoke to my Step Mum about Down Syndrome, she said that he would learn at a different pace and that he may not be able to do things in the way we would.

Since that day, I think all of us kids took it as a challenge to teach him as much as we possibly could so he could live the best life.

But Dylan is determined and was always going to do it his way.  He started walking much before they ever thought he would and started picking up things really quickly.  He did have eight other kids to learn from!

As Dylan got older, he became my number one fan. He never missed a game, always asked if we were going to football and always wanted to say hello to the girls after the game... and of course make sure he showed them his muscles.

Dylan has travelled the world to watch me play. He came to the Women’s World Cup in Canada, the Olympics in Brazil and travelled to Japan to visit me when I was playing over there.

There is nothing more special than to look up in a crowd and his face cheering me on.

Over the years that Dylan has been around the Matildas he has made a few favourites.  Michelle Heyman gets a proposal anytime he sees her, and I think Laura Brock would be one of his favourites too.

He's a funny little dude, he doesn't like loud noises so when he comes to my games, he has his headphones on and iPad in his hand. Just picture the Rio 2016 Olympics Quarter Final, Australia vs Brazil in Belo Horizonte. a crowd of 60,000 people and he's sitting there with his headphones on and iPad in hand.  It still makes me laugh thinking about it.  Even with the sensory overload, he never misses a chance to watch me.

Dylan really puts life into perspective and makes me wish we all lived as simply and happily as he does.

As much as we have taught him as his brothers and sisters, Dylan has taught us even more.  He reminds us about living life to the fullest and appreciating the people around you.

Whenever I'm having a bad day or something has upset me, I usually head to my Dad’s place just to be around him.  He makes life happy. The only time I haven't seen him happy is when I've told him that he has done something wrong (which doesn’t happen often). 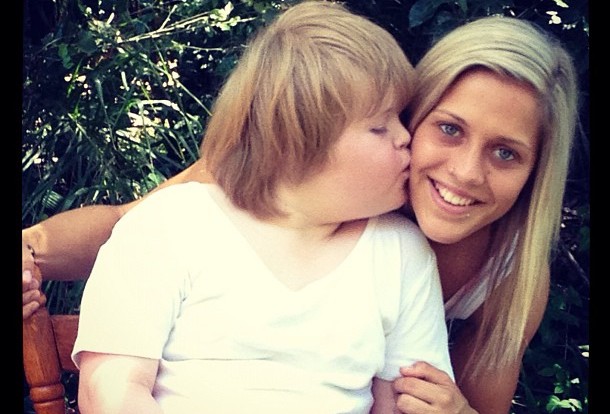 One of the most special moments in my life was going to watch him and his classmates at their Christmas dance. Just picture 15 or more students, smiling from ear to ear singing Christmas carols and dancing around the stage.   Pure joy.

Dylan is my world, and I wouldn't change anything about him.

On International Day of People with Disability, Football Federation Australia celebrates the members of our football family who live with no limits.