The Check In: Amy Harrison making history with PSV

In our latest instalment of The Check In, we chat with Westfield Matilda Amy Harrison who is currently in the Netherlands. The PSV midfielder is gearing up for her side’s return to league action after securing wins in the KNVB Cup and Eredivisie Women's Cup.

It’s been very familiar opposition for Harrison and PSV – they've played and defeated Zwolle twice in a week in two different competitions.  Harrison played a role in both games. She scored one of PSV’s six goals in their first back since winter break. She then provided an assist in their 3-0 win quarter final win.

“It’s nice to play again. We had basically been in a mini preseason again. So I’m very delighted that games are coming back at us thick and fast.” she told matildas.com.au.

“It was obviously a real positive to get a big win first game back and always positive to get on the scoresheet. It’s something that I’m trying to add in. So to get on that and start the year off in a positive way, I’m really happy with that and now it’s just about winning more and more and doing what I can for the team.”

The 24-year-old made the move to the Dutch giants following the 2019-20 Westfield W-League like most of her Aussie team mates. When she moved, the world was only at the beginning of the pandemic.

“It’s crazy to think that it’s been six, almost seven months being over here now. I feel like I’ve settled in well. Apart from the craziness that Covid brings and lockdown and all that. But you learn to live with it and how to deal with it and just go about your day the best you can.”

Covid has added various layers of challenge to the already enormous change of moving to a new team in a new country. The opportunity to explore and soak up the culture of a new place has been replaced by Covid safe trips and following health and safety guidelines and lockdown protocols.

However, the opportunity for learning and growth is one Harrison has taken in her stride.

“Honestly, I think I’ve learnt so much on and off the field. Obviously, on the field, a lot of tactical and technical things and more just how I take my game and progress it.”

“Off the field, you learn a lot about yourself in lockdown on the other side of the world with not much around you.

“So the days where you haven’t seen sun in weeks and it’s raining, miserably cold, and you’ve got to get up and get after it and just push through.”

There have been more traditional challenges Harrison has faced. The most obvious being the language barrier. Luckily, she has been able to work through it with Westfield Matildas and PSV team mate, Kyah Simon, as well as her other English-speaking team mates.

“It’s difficult but you’re coming in to this country knowing that that’s what it’s going to be so you start to pick up on Dutch words and everything. It’s difficult but we have each other thankfully and that definitely makes it a lot less daunting in such a crazy time.”

On the pitch, things have been going well for Harrison and PSV. The Eindhoven based team sit in second on the Eredivisie Vrouwen table behind Ajax and are still in two cup competitions.

Harrison has impressed featuring in all nine league games so far and starting eight.

“The past few years I was coming in and out of injury so often that I could never find that consistent game time or to be a consistent starter so to come here, and to be a starter, and play a lot of minutes has definitely been a big positive for me.”

“And then within that I definitely think it’s helped progress my game. You learn so much from playing a lot. Mistakes and how you improve and making the things you’re good at, better. So I think it’s definitely been a big positive for me and something that I’m very happy about.”

During her time in the Netherlands she has also made her UEFA Women’s Champions League debut, featuring in both legs of PSV Round of 32 clash with Barcelona. It was the club’s debut in the competition as well, making Harrison a part of PSV history. 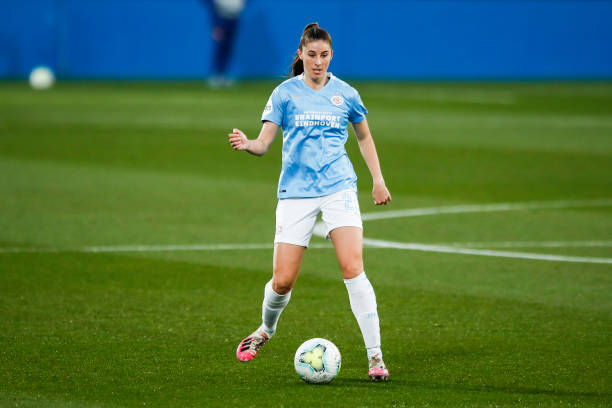 “Playing Champions League was honestly a dream come true. It was two very tough games but two games with so much learning involved and to play against Barcelona – one of the best club teams in the world and a team I’ve always admired growing up – to play them was amazing.”

“It was an amazing experience and something that I’ll take with me for the rest of my career.”