In a devastating blow, Westfield Matildas star Hayley Raso has been ruled out for up to eight weeks with a back injury, meaning she will miss the National Women’s Soccer League finals with Portland Thorns.

Raso suffered a non-displaced fracture in her back in the Thorns hard-fought 1-0 win over Washington Spirit in the NWSL on the weekend.

NWSL WRAP: Kerr at the double for Chicago

The incident happened in the second half when she collided with Spirit keeper Aubrey Bledsoe.

The 23-year-old had to be taken from the field on a stretcher and was replaced by Australian teammate Caitlin Foord.

The Thorns confirmed on Tuesday (AEST) that Raso would be sidelined for between six and eight weeks, meaning she’ll miss the entire NWSL finals series.

It’s a huge blow for Raso and defending champions Portland, who appeared to be peaking at the right time of the season.

With one match of the regular season to go, they sit in third spot with a chance to leapfrog Seattle Reign into second when they face-off in the final round.

Raso has made 12 appearances for the Thorns this season, scoring two goals and providing two assists, including one for Tobin Heath’s winner over the weekend.

She will conduct her rehabilitation program with Thorns FC sports medicine staff at the club’s base at Providence Park. 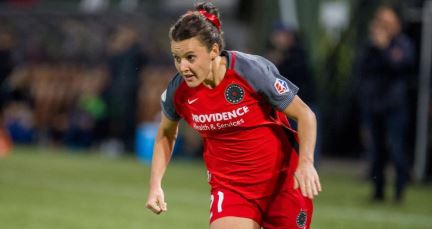