Football kits become synonymous with important moments. They are as much a part of the story as the wins, the goals, and the history-making.

Ahead of the National Teams Kit launch on Thursday, we look back at some of the defining moments in Westfield Matildas history and the jerseys involved.

[MORE: Register for the reveal of the new Nike 2020 Australia National Team Kits]

It’s always Brazil, has been since 1988. In friendlies, Olympic Games, and FIFA Women’s World Cups, Australia plays Brazil. The 2019 edition of football’s biggest tournament was no exception. The Westfield Matildas had beaten Brazil in four of their last five encounters.

In the specially designed Nike home kit and green shorts, things didn’t look good early on in this group stage clash. Goals to Marta and Cristiane had the Brazilians up with half time approaching.

Caitlin Foord pegged one back from close range just before the break. Chloe Logarzo’s long range ball beat everyone and levelled things. An Emily van Egmond cross in found Monica’s head and the back of the net and, after confirmation from VAR, Australia had the lead. 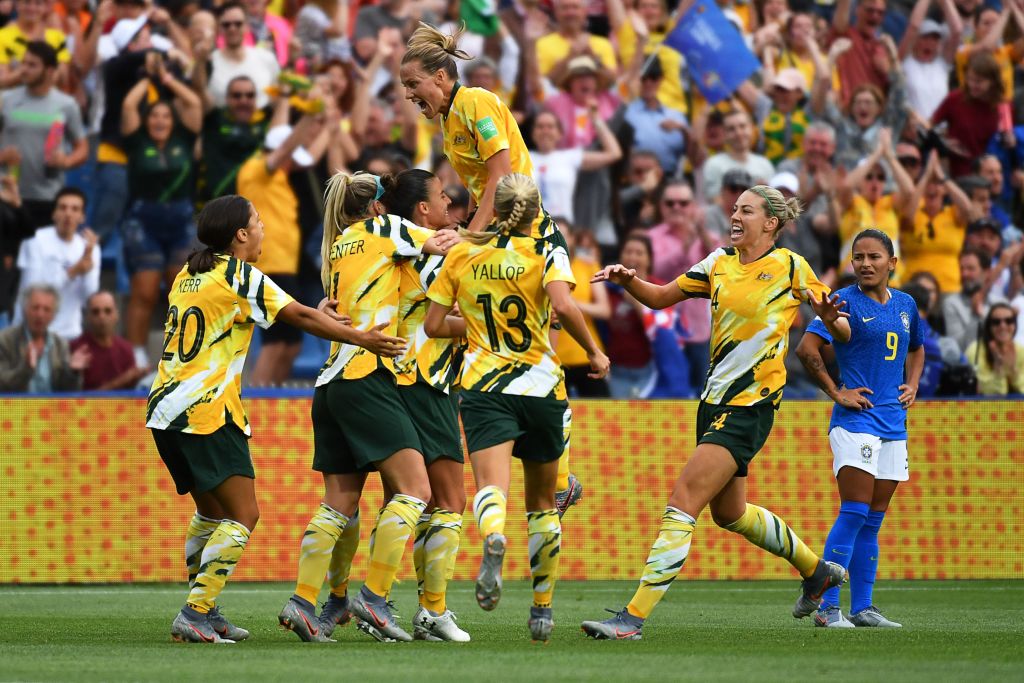 The expansion of the FIFA Women’s World Cup meant in 2015 there would be a Round of 16 for the first time. Australia progressed from its group and drew Brazil. A rainy day in Moncton saw the Westfield Matildas don their navy blue away strip. It was a seesawing contest, with Brazil coming close on more than a few occasions.

With only 10 minutes to play and the score locked at 0-0, a turnover in the attacking third saw Katrina Gorry play a through ball to Lisa De Vanna. Her first time shot wasn’t held by Luciana in the Brazilian goal.  Kyah Simon had run into the box and was alert to the fumble, hitting the rebound into the back of the net. 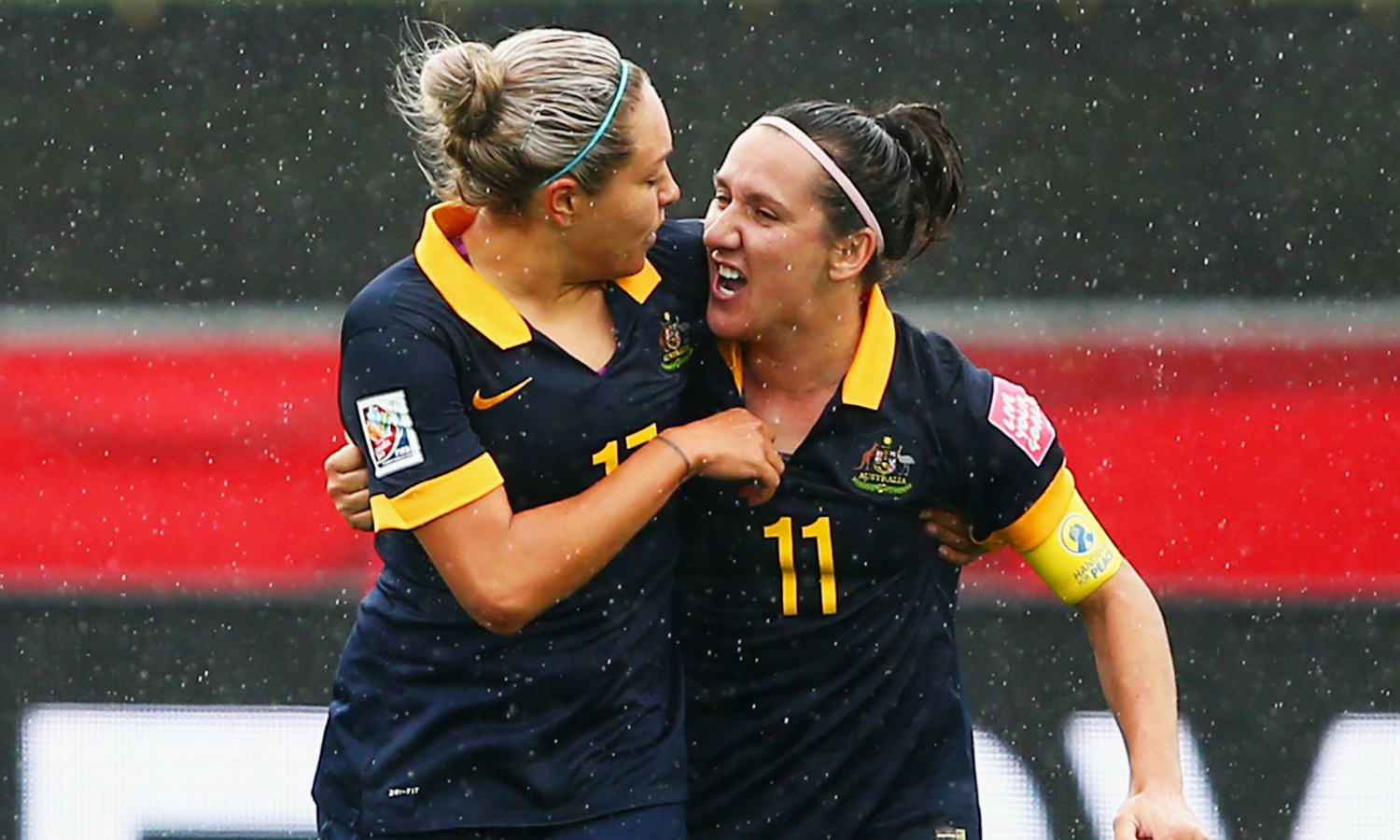 Australia would hold on to record the first knockout stage win by a senior national team at a FIFA World Cup – men’s or women’s.

The Westfield Matildas’ not only got their first FIFA Women’s World Cup win in 2007 but progressed out of the group for the first time.

The matches against Ghana and Canada in the group stage saw Australia wear the home kit.  A 4-1 triumph over Ghana saw goals from Sarah Walsh and Heather Garriock as well as a Lisa De Vanna double. A draw against Norway kept Australia in a good position to advance to the knockout stages.

[MORE: The day the Westfield Matildas made history at FIFA Women's World Cup]

The final group game against Canada in Chengdu – a place filled with Westfield Matildas’ history – started poorly with Canada scoring in the opening minute. Collette McCallum equalised just before the hour. Christine Sinclair gave Canada the lead in the 85th minute; a win would see Canada make it to the quarter finals. But Cheryl Salisbury scored in the 92nd minute. A testament to the 'Never Say Die' attitude.

Australia’s first AFC Women’s Asian Cup trophy came in 2010 in dramatic fashion. Progressing out of a tough group that included China and South Korea, the Westfield Matildas found themselves up against Japan in the semi final.

A lone Kate Gill goal saw Australia progress to the final to take on North Korea. The torrential rain in Chengdu made the match a slog. A baby faced Sam Kerr scored early before Jo Yun-mi equalised. Extra time couldn’t separate the teams and penalties followed. 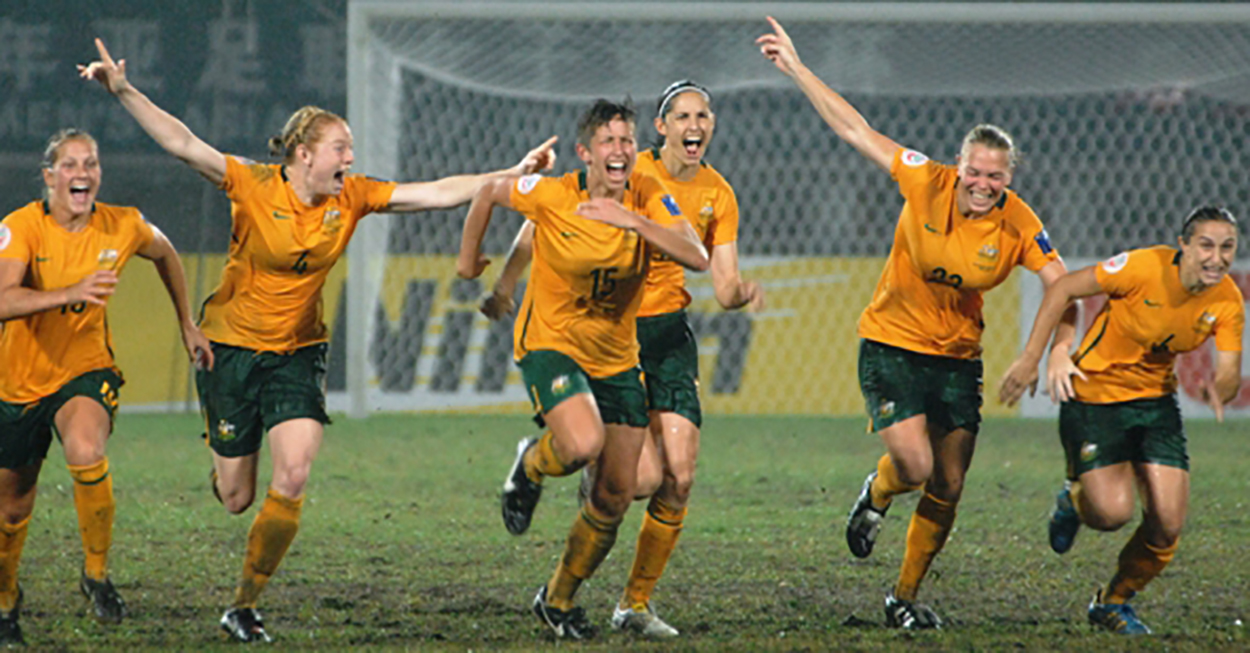 Completely soaked and muddied in their yellow shirts and green shorts, Sally Shipard, Kylie Ledbrook, Kate Gill, and Heather Garriock stood up and converted their spot kicks. After a North Korean miss, Kyah Simon had the chance to win the tournament for Australia. She buried it and Australia took home the trophy.

2017 was a big year for the Westfield Matildas despite there being no major tournaments. The all yellow strip with the subtle pattern on the shirt saw Australia win a trophy and break records.

[MORE: How to watch full match of Westfield Matildas v Brazil in 2017 friendly]

There was the historic first ever win against the USWNT. Tameka Yallop’s lone goal enough to secure the victory. Then there were the convincing wins over Japan and Brazil to secure the Tournament of Nations. Sam Kerr’s backflip celebration went viral.

On home soil, there were the friendlies against Brazil in Penrith and Newcastle. A sold out Penrith Stadium was treated to one of Lisa De Vanna’s finest goal and the first of two wins over Brazil. While Newcastle got to witness another victory and a Kerr backflip.