Prime Minister Malcolm Turnbull has described the Westfield Matildas as role models for future generations of Australians and says the team's success is driving a spike in registration numbers.

Speaking at an official function in Sydney on Monday to celebrate the team's qualification for the Rio Games, Turnbull and wife Lucy were special guests together with FFA Chairman Steven Lowy, former Chairman Frank Lowy and FFA CEO David Gallop.

And the PM spoke of their pride at how the team has captured the nation's attention after their barn-storming qualification campaign over the last two weeks in Osaka, Japan.

"What a fantastic achievement to come out on top and qualify for the Olympic Games - for the first time since 2004," he said.

"You are and you will [continue] to be fantastic role models for young women and girls playing football. 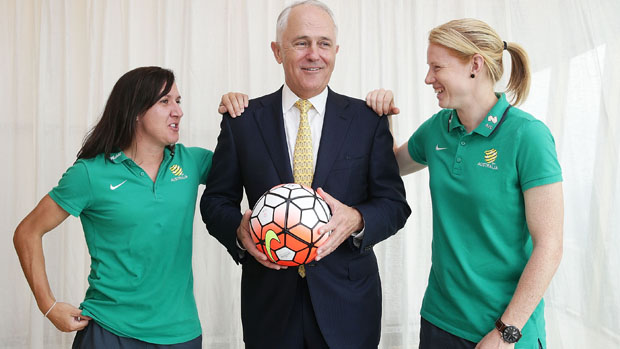 "I understand the participation rate in women's football is up 20% this year and now 20% of all registered football players are women and girls.

"The total number has passed 100,000 so you are the role models for those girls who are kicking the round ball around. They are looking to you, they want to be like you, they're inspired by you."

The Prime Minister added the Australian women were great examples of what it means to be successful Australians.

"And it's not just in football... you are examples of role models of success and effort and hard work.

"You inspire young people boys and girls - but especially girls - in having a go.