They are the AFC’s two fiercest rivals and now they are preparing to go head-to-head in a massive FIFA Women’s World Cup quarter-final on Sunday (AEST).

World and Asian champions Japan and the Westfield Matildas have engaged in some epic encounters over the last few years and another one looms in Edmonton.

Of the 21 times the nations have met, the Matildas have won five, with eight draws and eight wins for Japan. We look back at the three most recent clashes between the two sides.

The Matildas were out to defend their Asian Crown from four years earlier and made a bright start with Sam Kerr almost scoring twice inside the first few minutes.

But an even contest swung in Japan’s favour just before the half hour mark from a corner.

A clever variation saw the ball played to the edge of the box before a deep curling cross to the far post caused confusion in the Matildas’ defence. Azusa Iwashimizu rose highest and directed her header between a clutch of defenders with the ball ricocheting off the post and into the back of the net.

The Matildas never gave up and pushed hard for an equalizer in the second half, with Tameka Butt and Caitlin Foord brought on to inject some spark.

Kerr’s stunning volley hit the back of the net but was ruled out for offside while Michelle Heyman also went close as Alen Stajcic’s side went for broke.

But Japan held on for their first ever Asian Cup title to go with their World Cup crown won in Germany three years earlier.

Before that thrilling decider the two sides also met in the group stage.

The Matildas made a blistering start, racing to an early lead midway through the first half.

Speedster Foord got the opener, producing a classy finish after beating two defenders, the ball finding the inside of the post on its way into the net.

Both sides wasted good opportunities either side of the break before the Matildas looked to have taken control on the hour mark when Lisa De Vanna pounced.

But that goal created a sudden lift in urgency from Japan and they stormed home.

Claire Polkinghorne scored an unfortunate own goal 19 minutes from time before substitute Yuki Ogimi levelled the scores in the 84th minute, latching onto a header that Lydia Williams could do nothing about. 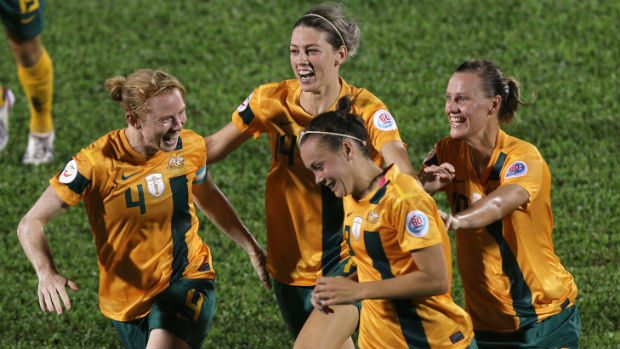 This pre-Olympics friendly was a farewell clash for Japan before they went off for the London Games with more than 20,000 fans turning out in Tokyo.

It turned out to be a memorable night for the home side who created a procession of chances from the outset.

Only some resolute defending from the Aussies kept the scores level early but a penalty on 26 minutes  – after Tameka Butt clipped the heal of Homare Sawa – gave Japan the lead.

Aya Miyama converted from the spot and it was 2-0 right on the stroke of half-time when Ogimi tucked home Kinga’s pinpoint cross.

Japan finished the scoring following another corner, with Sawa finding room in the box before calmly driving the ball into the bottom corner.

While it wasn’t a happy night for the Matildas, it will be remembered for the debut of youngster Katrina Gorry off the bench.