Made in the Westfield W-League: Up-and-coming Westfield Junior & Young Matildas to watch this season

With a legion of experienced internationals now plying their trade overseas, the 2020/21 Westfield W-League is shaping up as a prime opportunity for Australia's next generation of superstars to shine.

As they say, with change comes opportunity and the release of this year's playing rosters revealed a scattering of Westfield Young Matildas talent littered throughout the nation.

Many have already enjoyed a taste of our nation's domestic top flight and are now determined to step up and establish themselves as household names.

Here is one player to watch this upcoming season from each of the competition's nine clubs. 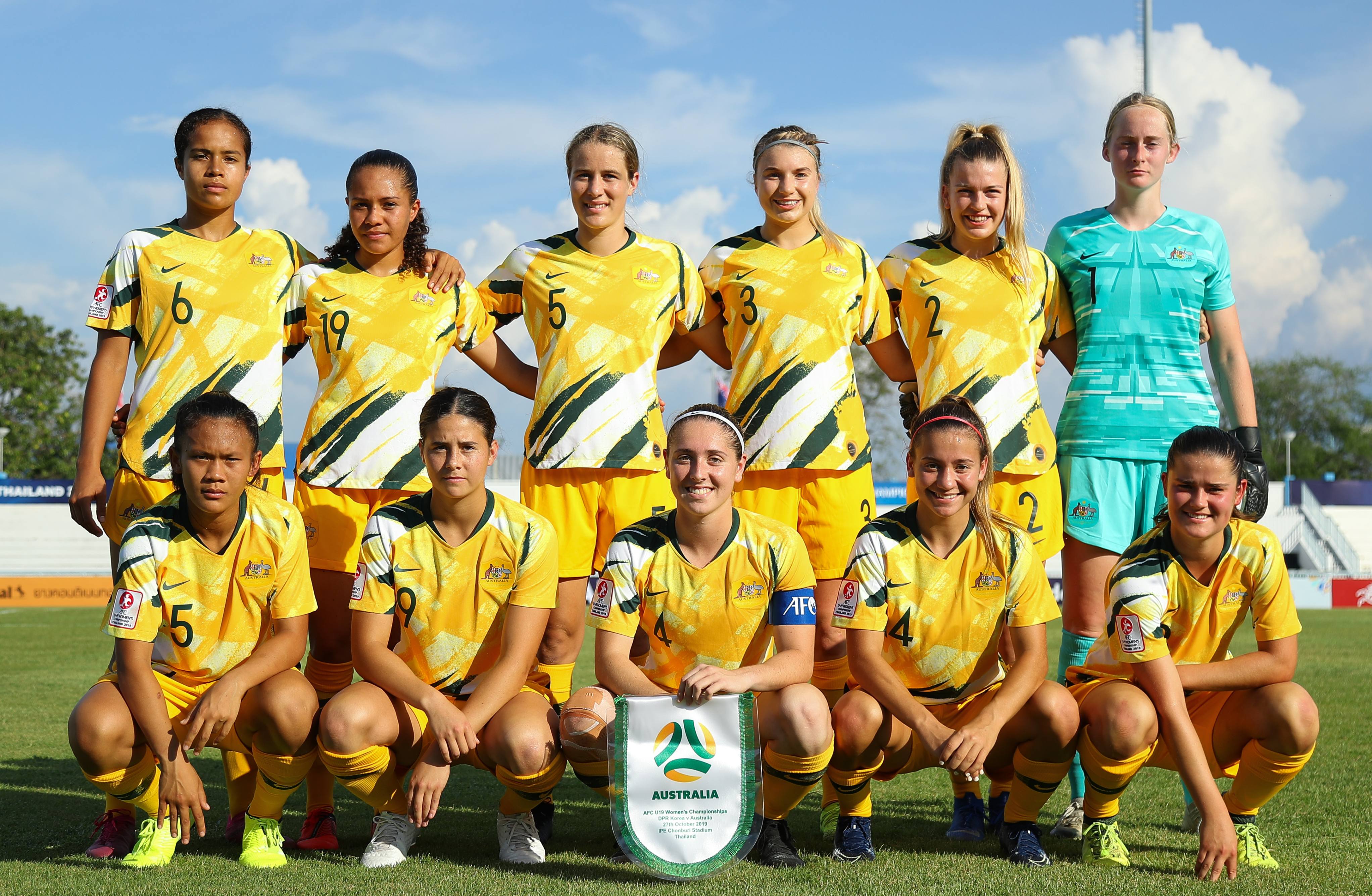 All of the below players represented Australia at either the 2019 AFC U-19 or AFC U-16 Women’s Championships.

Fresh off seven months in Sydney, training with the Future Matildas and representing Blacktown Spartans in the NPLW NSW, Charlotte Grant will return to the City of Churches with some valuable experience under her belt.

Grant was also selected to participate in the recent Women's Talent Identification Camp that took place in Canberra.

The fullback will be eager to build upon the 12 appearances she made last season and continue to play an instrumental role in the Reds' defensive unit as they look to improve upon an 8th-placed finish last time out.

Also be sure to keep an eye out for Westfield Young Matildas shot-stopper Annalee Grove who has traded Canberra for Adelaide this campaign.

Young goalkeeper Morgan Aquino is a strong contender to start between the sticks for Brisbane Roar this season.

Aquino spent the majority of last season at Perth Glory as back up to Matilda Eliza Campbell, making three appearances.

She is one of the country's most highly-rated young custodians and will enter the W-League with her confidence sky-high after a strong season with the Northern Redbacks in the NPLWA, which notably saw her take home player of the match honours in the Women’s Top Four Cup Final after saving three spot kicks.

Aquino has signed for Brisbane from Perth alongside 18-year-old Leticia McKenna, who already has 25 W-League appearances to her name.

Former Westfield Junior Matildas captain Jessika Nash is the only player on this list to have not yet made a Westfield W-League appearance.

Following Karly Roestbakken's move to Norway, Canberra United is the only club without a player from last year's AFC U-19 squad in their ranks - but that does not mean they are without a potential future star.

Despite being just 16 years of age, Nash has demonstrated outstanding leadership characteristics for both club and country, most recently impressing as a mainstay in the backline of Football NSW Institute's NPLW first grade side.

The defender will be itching for a first taste of Westfield W-League action under Vicki Linton this season and has certainly demonstrated signs that she is capable of grasping any opportunities with both hands.

Hollie Palmer is one of the many exciting new recruits who will represent Melbourne City this season.

At just 19 years of age, she already has three seasons worth of Westfield W-League experience under her belt and will be determined to break into Rado Vidosic's first team plans.

Palmer was awarded the Westfield W-League Young Footballer of the Year nomination for February 2020 after a standout month that included a goal against her future employers City.

Future Matildas defender Chelsea Blissett, who appeared destined for a breakout year in 2020/21, will unfortunately be sidelined for the duration of the campaign after tearing her Anterior Cruciate Ligament (ACL).

Kyra Cooney-Cross' eye-catching performances for Western Sydney Wanderers saw her develop into a household name during the 2019/20 Westfield W-League.

A year after bursting onto the scene as a 15-year-old with Melbourne Victory, the Future Matilda registered four goals and three assists for the Wanderers in 2019/20 as they qualified for the finals for the first time in their history.

A dynamic midfielder with creative spark and an eye for goal, expect Cooney-Cross to pick up where she left off last season as she returns to Melbourne.

Her combination play moving forward with four-time Westfield W-League Champion Lisa De Vanna may well prove to be the perfect blend of youth and experience for Jeff Hopkins' side as they look to go one step further than their second-place finish and semi-final defeat last season.

After biding her time in the Newcastle Jets academy, Tessa Tamplin emerged to make her Westfield W-League debut in January 2019 before making the right-back spot her own for the entirety of their 2019/20 campaign.

The second of her two senior goals saw her make the headlines after turning her back on a miscued 40-metre cross which remarkably sailed into the back of the net.

Primarily a defensive-minded player, expect Tamplin to feature yet again in the right fullback role under coach Ash Wilson - someone the youngster is extremely familiar with from her time representing the Emerging Jets in the NPLW.

Hana Lowry was one of a raft of teenagers who broke into Perth Glory first team last season, announcing her arrival with a memorable goal on her starting debut in Newcastle.

The left-footed midfielder was one of five Western Australian who represented the Westfield Junior Matildas at the 2019 AFC U-16 Women's Championships; a tournament where she started all five games and scored three goals.

The impressive youth development record of her new coach Alex Epakis may well suggest Lowry and co. are set to flourish in Glory purple this season as the former Sydney University NPLW coach looks to restore an era of success in the West.

Also be sure to keep an eye out for Westfield Young Matilda Deborah-Anne De La Harpe who has been handed her first Westfield W-League contract after a strong season with APIA Leichhardt in the NPLW.

Princess Ibini is by far the most experienced young talent on this list and the only player listed to receive a senior cap for the Westfield Matildas.

While she is still only 20 years of age, Ibini's impressive goalscoring record at youth level, with 16 goals in 30 games for the Westfield Young Matildas, is yet to be replicated at club level - she has scored nine times for Sydney FC since making her debut in 2015.

The lack of international imports at the Sky Blues this season may well prove to be the perfect recipe for her to kick on and embark on a consistent goalscoring run for Ante Juric's side.

Sydney also boasts in their ranks youth internationals Angelique Hristodoulou, Rachel Lowe and Charlize Rule, who will all be pushing for a first team place.

Young defender Courtney Nevin well and truly established herself in Western Sydney last season, playing every minute for Dean Heffernan's side and taking home the club's Best and Fairest award.

The defender is no stranger to individual accolades having also won the 2018 NPLW NSW Player of the Year award after scoring 11 goals in 25 games for Football NSW Institute.

After a season spent at fullback at the Wanderers, Nevin demonstrated her versatility playing across the backline for Sydney Olympic as they finished second in the 2020 NPLW NSW and is sure to be integral figure yet again for the Red and Black this campaign.

Another Westfield Young Matilda to watch out for is talented 19-year-old midfielder Susan Phonsongkham, who has re-signed with the Wanderers and is looking to rebuild some momentum after enduring a tough run of injuries.