For the first time since its inception in 2008, the 2020-21 Westfield W-League will not feature Kyah Simon.

The Westfield Matildas forward is one of the most decorated players in the competition’s history with three Championships, two Premierships and a Golden Boot, Young Player of the Year award and Julie Dolan Medal to her name.

While she will spend this summer abroad with Dutch powerhouses PSV, the 29-year-old has sensed a number of similarities from back home.

As an experienced player with almost 100 international appearances to her name, Simon is relishing the opportunity to mentor her up-and-coming teammates.

“It's been a total 180 for me I guess, thinking back to when I was in the W-League and being that young girl with older girls there to look up to,” she said.

“I think back eight to ten years ago where a lot of us in the W-League were super young and similar ages to what the girls are here now, in their late teens to early 20s.

“I knew that was my stepping stone to play and pursue my international career so I can definitely see similarities in the girls now and having the experience that I do, my role is to just try and help the girls where I can - in a football sense but also dealing with things off the field.

“It’s funny to see how like-minded some of those young girls are to myself in the W-League when I was coming through the ranks.”

Simon has only registered a handful of appearances for PSV since joining in July.

Her first few months in Europe have been far from straightforward, with injury, COVID and a managerial change at the club all playing their part.

"It's been an interesting month or two for me personally and as a team," she recalled.

"We've had a manager change about a month ago and it was a little bit disruptive with Champions League approaching so soon and a lot of games ahead. 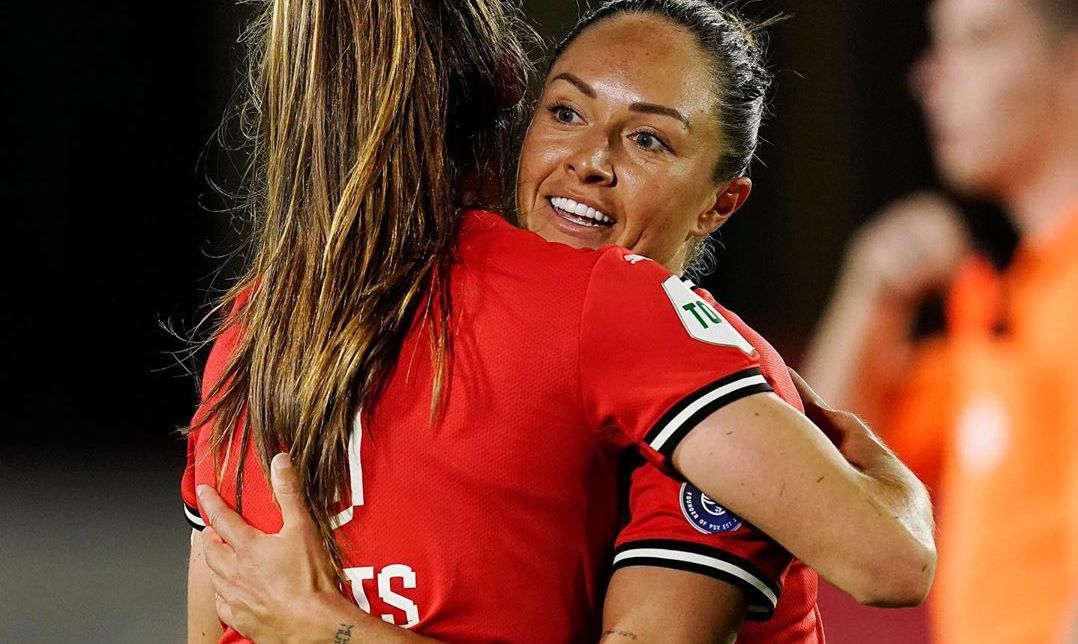 "That was a bit of a weird transition period and for me personally I had a couple of niggly injuries that I was dealing with, trying to get myself back 100% on the on the field.

I guess we have been through a lot with half of the team having COVID so there's been a lot of different obstacles and challenges but it's all part of it.

"I've enjoyed my time here and living in Eindhoven but just the consistency and the fluidity of the football side of things have definitely not been up to the norm that I'm used to."

Last weekend Simon made the long-awaited returned from injury after being out of action for nearly two months.

A few weeks earlier, a calf issue meant that she was forced to watch on from the sidelines as her side were eliminated by Barcelona in the UEFA Women’s Champions League Round of 32 .

Either way, her first taste of Europe's premier club competition was a memorable one.

"Unfortunately I had a little bit of a calf strain a few days before the game so that was disappointing on my end, but getting myself back fit to travel with the team to Barcelona was personally rewarding," Simon reflected.

"I was just really happy to be travelling and supporting the girls in any way that I could whether I got on the field or not.

"I knew it was probably a long shot, having only trained fully with the team once or twice before the game, so I had no expectations there but what a great experience for all the girls in the PSV team: their first Champions League experience playing against some of the best players in the world in Barcelona."

As the former Central Coast Mariners, Sydney FC, Western Sydney Wanderers and Melbourne City star looks to make her mark in Europe, she will be keeping a keen eye on the action unfolding back home.

“I love playing in the W-League, it was always a highlight for me every year knowing that I was going home and playing in front of family and friends in Australia,” she reflected.

“It’s definitely been weird seeing the signing announcements and the lead up to the start of the season but I’ll definitely be watching from afar, keeping close contact with the City girls and watching games in any way I can.

“It's sad but at the same time, I have wanted to pursue my European football dreams and that's part of what I need to do and the sacrifices that you need to take: not spending Christmas with family or not being in Australia for a beautiful summer and playing in the W-League.”

Simon will have plenty of time to celebrate the festive season on the other side of the world, with PSV's next fixture not scheduled until early February.