Gallop’s Matildas callout to all Australians

Football Federation Australia (FFA) CEO David Gallop has urged all Australians to jump on the Westfield Matildas wagon and embrace the team, not only in its Women’s World Cup mission but as one of their favourite national teams.

Gallop’s passionate call came during yesterday’s media conference to announce the Westfield Matildas squad for next month’s FIFA Women’s World Cup 2015™ Canada. What made it all the more prevalent and overwhelmingly genuine in his proudness and delight in the Westfield Matildas was the fact that in no way was it rehearsed as part of his opening statement to the media but rather came spontaneously after Head Coach Alen Stajcic had answered questions about his player selections.

“We’re calling on all Australians to support the Matildas because you’ll see three things if you get behind them – a team that competes fiercely, a team that supports each other, and you’ll see a lot of smiles on the field,” said Gallop.

“That’s one of the things I love about the Matildas, that they have fun, and while they’re trying to win they’re having a good time as well.”

In the short address Gallop provided before Stajcic outlined his squad selections, the CEO was complimentary for the job the Westfield Matildas boss had done since assuming the role and that despite the huge challenge the team faces to progress out of its group, is confident and excited about their chances. 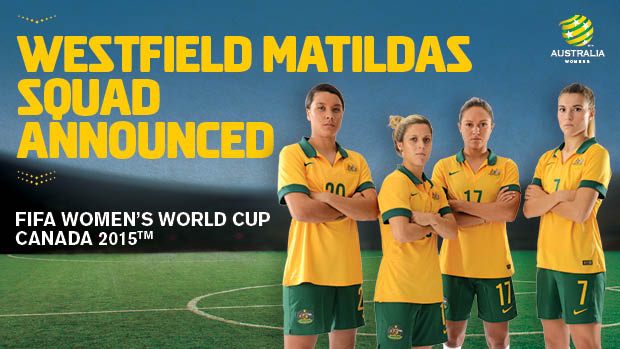 “They (the Matildas) have not only had an important physical preparation but I want to congratulate Staj for the culture he has instilled in the squad and the buy in that the players have had into that culture.”

“We’re in the top ten, we’re a genuine contender and as our slogan for this tournament says, ‘this is it’, it all gets serious from now.”

Somewhat fittingly, the timing of the squad announcement and the FIFA Women’s World Cup 2015™ Canada comes soon after FFA released its strategic Whole of Football Plan, the 20 year vision for football in Australia, of which women’s football is seen as a highly significant facet.

“We are very serious about women’s football and we invest heavily in it because it is important strategically for the future of the game,” said Gallop.

“The Matildas are role models for girls and women who play football and I’m sure they’re going to do us proud when they get over to Canada.”

Fans will have the chance to farewell the Westfield Matildas before they depart for the Women's World Cup when they take on Vietnam in a friendly at at Jubilee Oval, Kogarah NSW on Thursday 21 May 2015 (Kick-Off 6.30pm AEST). Click here for details.