Foord excited for a chance to reset ahead of Ireland match

No one was more excited than the CommBank Matildas when it was announced that a match against Ireland had been set down for later this month, with Caitlin Foord sharing it's an important next step in the journey.

"It's been a tough year for us not having any games, so to get this game in place against Ireland is huge," Foord said of the friendly announcement.

"It's obviously important in helping us continue our preparations, but also, to get the disappointment from the Bronze Medal Match at Tokyo 2020 out of the way, so we can move on from it."

Foord continued to explain her feelings on the Matildas' Olympic result and why this game is so important in resetting and moving forward.

"The initial feeling post-Tokyo was disappointment because we went there to win," she shared.

"We wanted to come home with a medal and we fell short, so that feeling of disappointment probably couldn't have been worse, being so close to something and falling short.

"But I think in the long run, looking back, we're extremely proud of what we have done, " she continued.

"To feel that disappointment and hurt benefits you in the long run, so I'm really excited for what's to come and what this team can prove."

Despite missing out on a spot on the Olympic podium, the Matildas still achieved their highest-ever placing at an Olympic Games. Foord credits this historical achievement to both the leadership of Tony Gustavsson and the hard work and belief of the team as a whole.

"Tony's come in and made a really good impression with his simple, 'one day better,' model he applies to every training and every game. He's instilled a working forward kind of mindset," she said.

"I think what helped us go that one step further was his ideals because we've always had the fight, but I guess in a way, we didn't have the belief of being able to overcome that hurdle of getting past the quarterfinals stage of an Olympics, so that was huge.

"I also put it down to our preparation," she continued.

"We had a good amount of time together and it was nice to know that everyone had done the work out on the pitch. You could look at anyone and know that they'd done the work to get us to where we are now.

"Being able to believe in every single one of the girls around you was really important and the fact that you couldn't fault anything anyone had done in their preparation because we'd all done it together."

READ: CommBank Matildas return to action against The Republic of Ireland
MORE: Home and Away: The Aussie-Irish connections

Although this will be the first time the Aussies and the Irish have lined up against each other, the teams are very familiar. Ireland's Denise O'Sullivan and Julie Ann-Russell, for example, have played in Australia's W-League and NPL competitions, while Foord plays with good friend Katie McCabe at Arsenal.

"We've never played Ireland before, but we've become more familiar with them after having Irish players in the W-League and obviously for myself, having a teammate in Katie McCabe here at Arsenal," Foord explained.

"I've actually watched quite a few of their games and have taken an interest because of Katie and they're a quality side, they're a fighting team like us, they never give up until the end, so I definitely look forward to it.

"I think it's going to be a really good battle because we've never played them before so it's a new challenge. We want to grow and to grow, you need new challenges," she continued. 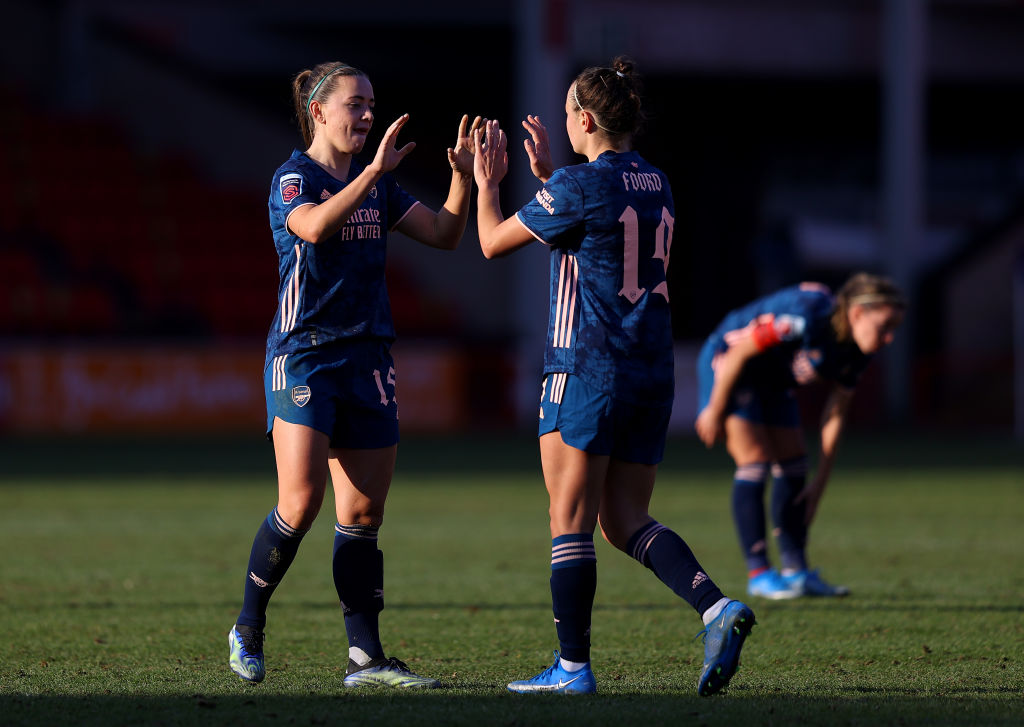 When asked if the upcoming match produced a bit of banter between Foord and McCabe, or if it was 'all business,' Foord said McCabe was just excited to be hosting the Matildas.

"Katie and I are good friends and she's a bit of a jokester, but she was more excited for us to come to Ireland, to be fair. She's been telling us for a while that we all need to come to Dublin," she said.

Foord hopes that the new fans and followers the Matildas picked up during their Olympic campaign are here for the long run, saying they have a lot to look forward to.

"I think the fans can really look forward to seeing the Matildas back in action again," she said.

"We know we caught their attention during the Olympics and that's not something we want every few years at major tournaments, we want that all year round. We want Australia to be a part of our journey, leading into the World Cup and beyond," she continued.

"I think Australia loves to watch us play and we definitely feel that when they are watching so we are really looking forward to that moment when we can step back out on home soil in front of all of them.

"It's going to be a really, really nice moment, so I hope they continue this journey with us."