The Westfield Matildas have continued their build up for the FIFA Women’s World Cup 2015™ with a closed door training game against China in Seattle earlier today.

The squad made the three hour road trip across the border into the American state of Washington for its first hit out since beating Vietnam 11-0 a week ago in Sydney.

The game against China comprised three 30 minute periods with unlimited substitutions, these hit outs designed to give both teams the chance to experiment, try different combinations, work on specific objectives and provide players with valuable time on the field against fellow World Cup participants.

Speaking after the game which finished 1-1, Westfield Matildas Head Coach Alen Stajcic said travelling all the way to Seattle to play was definitely beneficial and worthwhile.

“It was a good tight game and a tough encounter for us having to travel three hours to get down here to Seattle so the players did well, it was pretty hot and we came away unscathed with no injuries which was pleasing,” said Stajcic.

“There were a lot of objectives achieved, some good passages of play and also things we can improve on.

“Of course you want to go out and win every game you play but the primary focus of playing these games is to work on various things, give players game time, and test ourselves against quality opposition.” 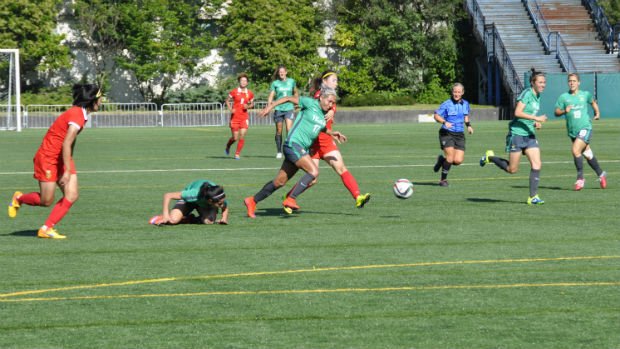 One of the players to get some solid minutes was midfielder Tameka Butt, the former Julie Dolan Medallist happy with how she is progressing after having an interrupted past 12 months with a hamstring injury.

“It was good to get out on the park and play against opposition and put into practise what we’ve been training for,” said Butt.

“I felt pretty good. I’m still trying to get my fitness back coming back from an injury and it was pretty warm out there but I think everyone put in a pretty good effort today.

With the Westfield Matildas’ opening FIFA Women’s World Cup 2015™ match against the USA only 11 days away, Butt said the anticipation is really building amongst the group.

“Everyone is getting pretty excited now and we’re just putting the finishing touches on everything, so the girls are pumped and there aren’t many days to go,” said Butt.

The Westfield Matildas will play another warm up training game against New Zealand on Saturday (local time) and then Switzerland on 3 June before relocating to Winnipeg for their match against the world number two ranked USA.