The Junior Matildas have been in irresistible form at the AFC U-16 Championship qualifiers in Vietnam and one player who has impressed is 14-year-old star Amy Sayer.

Despite being one of the younger players in the squad, Sayer made her debut in Australia’s opening match and scored in the first half of the Junior Matildas’ huge victory.

And the midfielder was simply delighted to pull on the green and gold.

“I have had to work extremely hard to get to this point,” Sayer says.

“The fact that I was playing for my country didn’t really hit me, I was more focused on doing my best and being a part of the team and helping to win the first game of the tournament.

Sayer admitted scoring his first goal for Australia made the occasion all the more special. 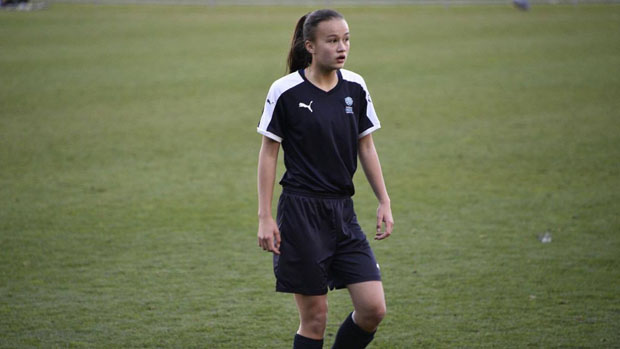 “I was looking forward to putting on the Australian jersey and playing my best, it felt amazing. It was already a special moment,” she said.

“I didn’t expect to score as well, so it made my first game for Australia even better.”

It has been a rapid rise for the Football NSW product who, back in June, was the youngest player chosen in the U-17 Football NSW Institute team for the NTC Challenge in Canberra.

A week later the 14-year-old was identified for the Young Matildas (U-20) before being called-up to a Junior Matildas camp in early July.

After impressing coach Ante Juric, Sayer was called up for a second training camp and eventually forced her way into the final squad for the AFC Qualifiers.

“My mum had just received the email and when she told me I was very excited and extremely happy to be chosen to represent my country doing what I love,” Sayer said.

The Junior Matildas round out the Qualification tournament against Uzbekistan on Saturday evening (AEST).