Young Matildas too strong for senior Thai side

Ante Juric's side made a slow start to the match, with nerves and intense heat playing a part, but  soon gained the early ascendency with their fluid passing game.

The Australian U-20 side dominated possession as the firs-half wore on with Amy Harrison, Alexandra Chidiac and Sunny Franco all having good scoring chances denied.

While the Aussies pressed for an opener they were susceptible to long balls on the counter, with the defence being caught out on a couple of occasions.

However the Thai attack were also unable to capitalise on their opportunties as the sides went to a much needed break goalless.

The Young Matildas got stronger as they acclimatised to the conditions in the second stanza, with a fine individual effort from Chidiac drawing a penalty.

Skipper Amy Harrison stepped up to take the spot-kick, calmly slotting the ball into the bottom right corner to give her side a deserved lead.

The advantage was doubled shortly after with a lovely piece of build-up play down the right side, with substitute Princess Ibini-Isei finding Goad at the back post to tap home into an open net.

The Young Matildas continued to control proceedings as the match wore on and iced the result in the closing stages, with defender Emma Checker reacting quickest to a scramble in the box to bury a third. 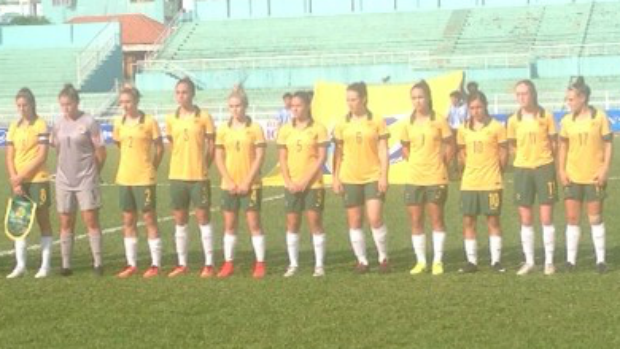 Coach Ante Juric was pleased with his side's first hit out against a team who has qualified for the 2015 Women’s World Cup in Canada later this year.

"The girls were fantastic today, considering we only had a day since we arrived and played in such sapping heat against a senior World Cup nation,” he said.

“In saying this, they don't surprise me any more. There is so much talent in this team and now they are understanding what can be achieved when they will do anything for each other on the field.

“I can't be prouder of how they are taking in information and how they are gelling as a team with an insurmountable spirit.”

The Young Matildas next play Laos on Sunday as they seek to go one better than their second place finish at the tournament in 2013.