​The Young Matildas have qualified for next year’s AFC U-19 Asian Cup tournament after a big win over Jordan in China overnight.

Only needing a draw to top their group at the qualifiers, Gary van Egmond’s side had little trouble getting the result they needed as they ran out comfortable 7-1 winners.

Remy Siemsen was the star for the young Aussies as she finished with a hat-trick, with Amy Sayer, Cortnee Vine, Alex Chidiac and Princess Ibini-Isei scoring the other goals.

On a hazy but cool night in Nanjing, both sides found it hard to get going early on before the match sprung to life just before the half-hour mark.

Vine gave the Young Matildas the lead with a fine goal, beating two defenders in the box before making no mistake with an excellent strike. 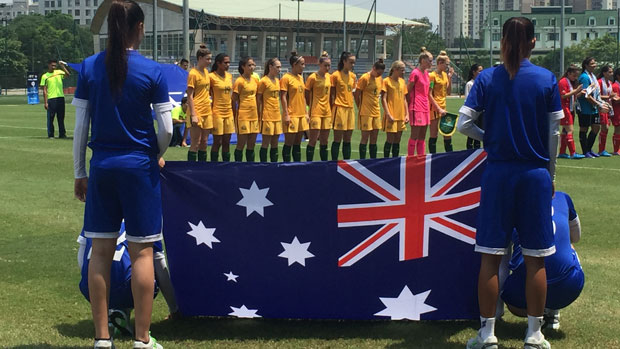 Jordan hit back a minute later before two goals from Siemsen – including a classy lob – in five minutes just before half-time had the Young Matildas 3-1 up at the break.

The result was safe three minutes into the second half as Chidiac made it 4-1 as her powerful effort went in via a deflection.

Ibini-Isei – a first-half substitute for the injured Vine – then got her name on the scoresheet on 64 minutes before Siemsen completed her treble three minutes later.

A neatly-taken free-kick on the edge of the 18-yard box by Sayer completed the rout four minutes from time to confirm Australia’s spot at next year’s tournament, which doubles as qualifiers for the FIFA U-20 Women’s World Cup 2018.

Vietnam, Uzbekistan, Japan, DPR Korea, Korea Republic and China PR are the other nations who are confirmed thus far for the AFC U-19 Asian Cup, which will be held in October, 2017.