The Westfield Young Matildas have continued their unbeaten start at the AFF Women's Championship, registering a hard-fought 1-0 win over Laos in Vietnam overnight.

Ante Juric’s side overpowered Thailand 3-0 in their opening group match but found the going much tougher against a resilient Laos outfit.

Young Matildas too strong for senior Thai side

Juric made wholesale changes to the starting line-up which included four debutants and it showed in the opening stanza, with the Young Matildas unable to penetrate in the final third.

Chances were at a premium for the Aussies in the first-half, with Laos frustrating the Young Matildas with their defensive structure and weight of numbers behind the ball.

Australia came out with more purpose in the second half and were rewarded in the 60 th minute with Captain Kobie Ferguson netting a sublime free kick from just outside the area.

The Aussies continued to dominate possession and territory as the match wore on but failed to convert their dominance on the scoreboard and were forced to settle for a narrow victory. 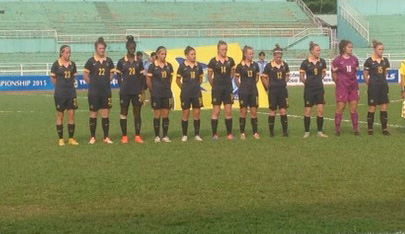 Juric said he was disappointed with his side’s inability to punish Laos although he admitted the personnel changes affected the combinations of his side.

"In being honest, we have to say that this performance was nowhere near our best and we expect more of ourselves as a group of players,” Juric said.

"There were wholesale changes from game one, with 4 debutants, which may have influenced the cohesion of the side however every member in this team sets themselves high standards and we fell short today.

"We look forward to playing Indonesia and the semi-finals, all of which is great for experience at this level for our girls.”

The Young Matildas’ next game is against Indonesia on Tuesday night (local time) before a likely semi-final clash with the Philippines or Vietnam on Friday.