Round 7 of the Westfield W-League 2018/19 Season may have been short on games, but it certainly wasn’t short on action.

Incredibly, there were 18 goals scored in three games —  a goal every 15 minutes.

The Westfield Matildas contingent lit up the Westfield W-League once more, with Princess Ibini’s brace steering Sydney FC to their second consecutive win, while Sam Kerr and Emily Gielnik’s goals weren’t enough to see their sides get the win.

Princess Ibini at the double

Ibini once again proved she’s punching well above her weight as an 18-year-old after bagging a classy brace against the previously unbeaten Adelaide United.

The youngster, who completed her final high school exams only earlier this year, showed her football intelligence to pounce quickest onto Chloe Logarzo’s effort which had cannoned off the left upright.

The finish was elementary as Ibini continues to develop the killer instinct that can rarely be taught.

Minutes later, Ibini lit up a soaked, thunder-ravaged Cromer Park when she received a pass from Logarzo at the edge of the box.

The Westfield Matilda took two touches and, on her third, fizzed a curling shot into the bottom-right corner. Sarah Willacy had no chance and could only dive in despair as the ball skipped past her.

Speaking of braces, Caitlin Foord bagged a brace of assists, helping Sofia Huerta and Daniella Colaprico on their way to goals.

Foord delivered a sumptuous cross for Huerta on the stroke of half-time, before teeing up Colaprico to give the Sky Blues the lead.

Alanna Kennedy played the full 90 minutes, while Lisa De Vanna was subbed off on 57 minutes. 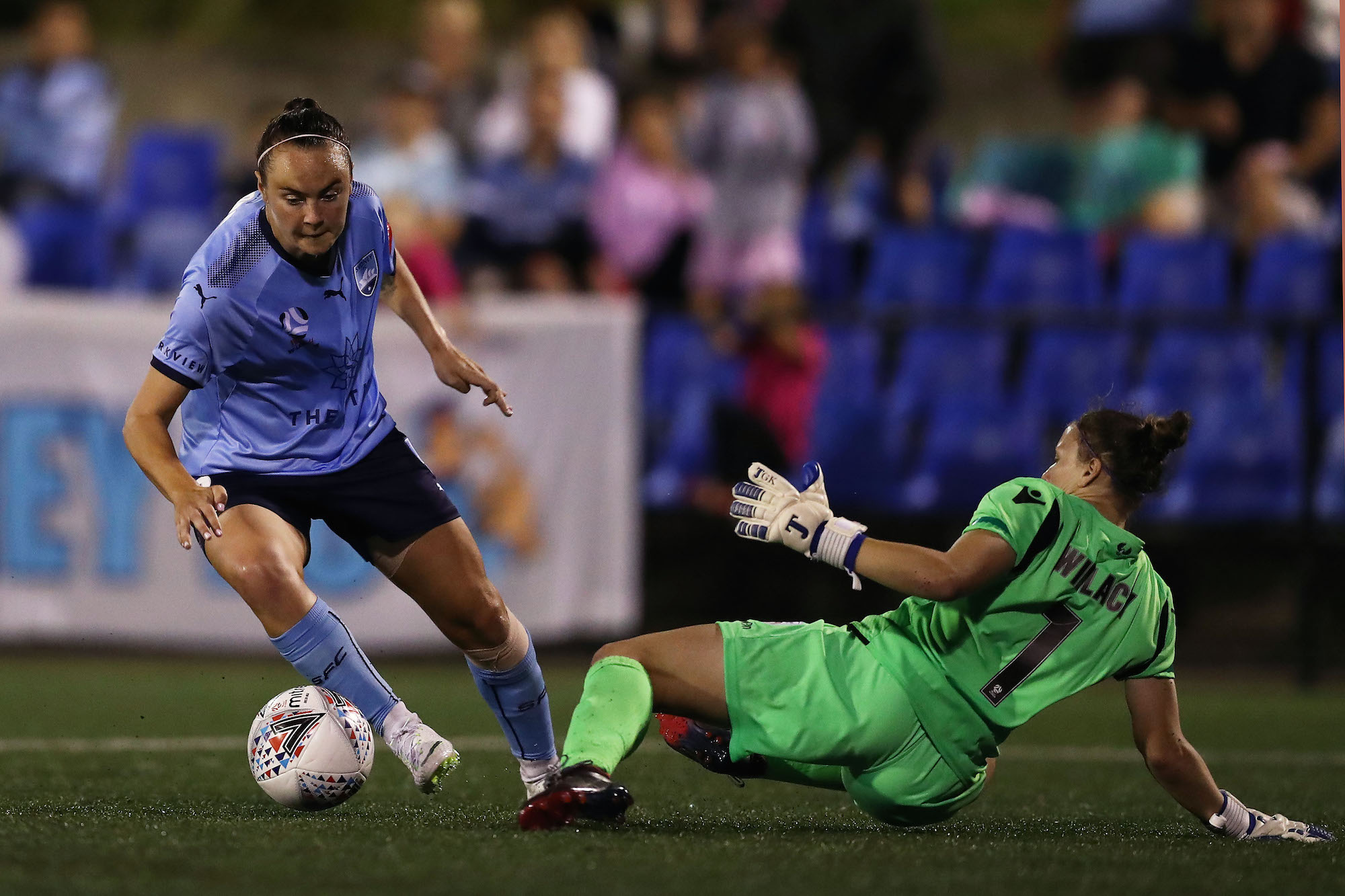 Kerr scores from the spot but can’t beat Eckerstrom again

Kerr may not have been able to grab all three points for Perth Glory against Newcastle Jets, but boy did she have an eventful 90 minutes.

The 25-year-old’s header, which was saved by Britt Eckerstrom on four minutes, fell into the path of Leticia McKenna who made no mistake from close range.

Just over 20 minutes later, Kerr was in the thick of it again when she was brought down in the box by Westfield Matilda teammate, Larissa Crummer.

Newcastle’s centre-back was given her marching orders, and Perth were awarded a penalty. With Kerr lining up the shot from 12 yards out, the end result was never in doubt.

Kerr would finish the game with seven shots, three of those on target, epitomising her productive performance despite failing to breach the formidable Eckerstrom for a second time.

On the other side of the divide, Emily van Egmond and Gema Simon clocked another 90 minutes apiece as the two return from international duty looking fresher than ever.

Emily Gielnik struck in injury time to bring the bring Melbourne Victory to within one goal of Brisbane Roar, but the hosts held on for a memorable 4-3 win at Lions FC Stadium.

With Victory chasing parity, Gielnik pushed on and found herself free in the box with two and a half minutes of injury time remaining.

Lia Privitelli picked her out after beating her defender, and Gielnik fired home to give the visitors a sniff.

It wasn’t enough though as Clare Polkinghorne’s Brisbane Roar held on.

Polkinghorne was solid at the back and played the full 90 minutes along with Mackenzie Arnold in goals for the home side.

Katrina Gorry came so close yet so far to completing the match, but was given a second yellow in the eighth minute of injury time.