Westfield Matildas ease past Vietnam on Road to Rio

A first half hat-trick from striker and stand in captain Kyah Simon has inspired the Westfield Matildas to a comprehensive 9-0 defeat of Vietnam to keep their 2016 Olympic qualification firmly on track.

The Westfield Matildas maintained their place at the top of the six team group standings with the one-sided result, five first half goals which included Simon’s hat-trick setting up the resounding win.

There were seven scorers in all, striker Emily Gielnik’s first Westfield Matildas goal starting the landslide with Simon, Alanna Kennedy, Ashleigh Sykes, Emily van Egmond and Michelle Heyman all chiming in before Clare Polkinghorne rounded it off with the ninth and final goal of the night.

In a further positive, the other two matches of the night both finished in 1-1 draws meaning the Westfield Matildas enjoy a two point lead over China and four clear of DPR Korea and Korea Republic who they meet next up on Friday. 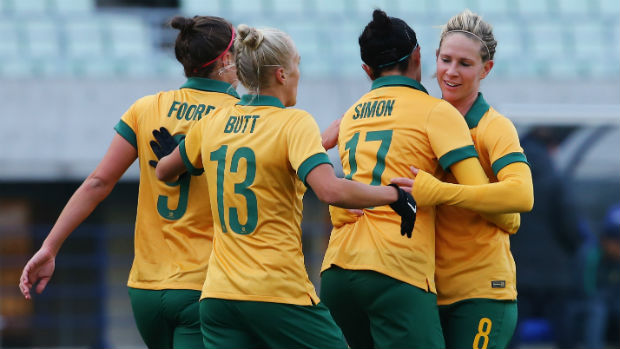 Westfield Matildas Head Coach Stajcic knew going into the game that Vietnam would be a different proposition to Japan and he was pleased in the fashion his players overcame the tricky hurdle.

“Obviously a good result for us today and a good performance against a team that makes it really hard to play against,” said Stajcic.

“Vietnam were very well organised, they worked hard for each other which we saw against China the other day, so I’m very pleased that we were able to score nine goals today and put together some good patches of football, but the best part is there is still room for improvement.”

Stajcic, just as he did after the victory over Japan, also reiterated that the ticket to Rio was still no certainty with more than half of the tournament still to go.

“Six points isn’t enough to get us to Rio, there is still a lot of football to be played,” said Stajcic.

“We’re two good steps down the track but there is still a long way to go and we know we’ve got three tough games ahead.

“We’ve made good strides forward but there is a long way to go and we’re not taking anything for granted.”

Stajcic made seven changes to the side that started in the win over Japan, which included a Westfield Matildas debut for 15 year old Ellie Carpenter, who became the eighth youngest Westfield Matilda to play in an ‘A’ international (ninth overall) and the 197th player capped for her country. 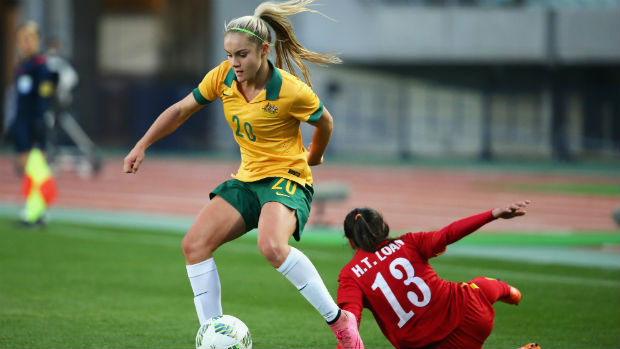 Making her ninth appearance, Gielnik scored her first senior international goal with a calm finish from an acute angle in the 10th minute after she sprung the offside trap after a perfectly weighted through.

Simon then hammered home her first of three for the half before Alanna Kennedy notched up her first goal for her country with a quality finish to make it 3-0 inside 20 minutes.

Vietnam refused to crumble and made it difficult for the Westfield Matildas to break them down but Caitlin Foord and Simon were causing havoc and the two combined to make it 4-0 before Simon completed her hat trick just before half time.

With the game safely in the Westfield Matildas’ keeping Stajcic replaced Simon and Steph Catley with Ashleigh Sykes and Clare Polkinghorne at half time.

Foord was also given an early mark as she came off for Michelle Heyman and the substitute almost added a sixth when she latched onto as long ball but her first touch proved too heavy and was diffused by Vietnam keeper Dang Thi Kieu Trinh.

But that was a rare blemish as van Egmond drifted a cross to the far post for Sykes who was on hand to knock the ball into the back of the net.

Then superb build up play from Tameka Butt saw her eventual shot saved but it fell on a platter to Heyman who put it in from less than a metre and the Westfield Matildas had eight on the board. 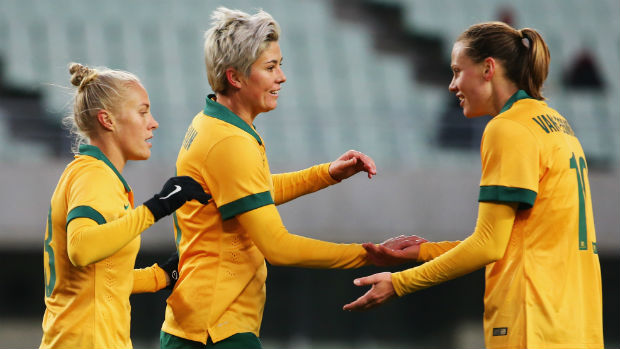 Caitlin Cooper thought she had scored her second international goal when she headed in a delightful van Egmond free kick but she was ruled offside with ten minutes remaining before Polkinghorne scored arguably the goal of the night when her cross turned shot from the right deceived Dang Thi Kieu Trinh and snuck in off the far post.

Vietnam were denied a late consolation as they managed to find the back of the net only for the flag to go up for offside.

The Westfield Matildas’ next match is against Korea Republic on Friday (4 March 2016) at Yanmar Stadium (kick-off 7.35pm local, 9.35pm AEDT).

For results in the other matches in the tournament visit http://www.the-afc.com/results