The Matildas take on their AFC rivals and the defending world champions in a blockbuster battle in Edmonton for a spot in the last four.

Japan have been flawless throughout the tournament so far, clinical in attack and hard to break down without the ball.

But van Egmond, who has been one of the Matildas most consistent in Canada, believes there’s one area they can exploit to continue their epic run.

“They [Japan] like to get numbers behind the ball but there’s areas in transition where we can catch them out,” van Egmond told reporters on Thursday.

“There’s no lie to see the speed we have up front.

“It’s a great rivalry for us and I think it’s probably one of the best teams we can play as they are the world champs,” she added.

“They are great technicians and they’ve worked very hard, they wouldn’t be where they are if they don’t work very hard.

“We’ve got a game plan, our coaching staff tells us exactly what we have to do and we stick to that. Hopefully [on Sunday AEST] it works out for us.” 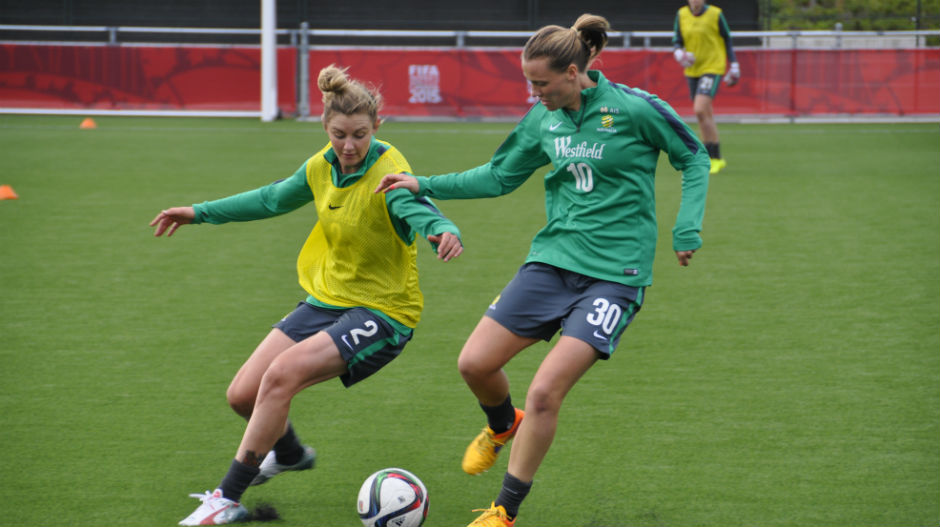 The Matildas will have to overturn their poor recent record against Japan if they are to reach the semi-finals.

The Aussies haven’t beaten Japan since they secured a 1-0 win back in 2010, with the world champions triumphing in last year’s Asian Cup final in Vietnam.

But van Egmond believes the Matildas are far better placed to overcome the world’s fourth-ranked nation this time around.

“We’ve had a great preparation since the 12th of January,” she said.

“We’ve been together pretty much since then, working hard and working towards this tournament.

“There’s no better preparation that I’ve been a part of with the Matildas, it’s been great.

“They are going to be just as up for it as we are but we’re full of confidence heading into this game. We lost the final in the [Asian Cup]…we’re looking for a bit of revenge.”

The Matildas have the benefit of an extra two full days to prepare for the clash but van Egmond doesn’t believe it gives them too much of an advantage.

After playing their second round clash with Brazil in cold, rainy conditions in Moncton, it’s expected to be more than 30 degrees for Sunday’s encounter.

“Down in Australia we play in the summer and play a lot of games around the 30 degree, some around the 40 degree mark,” van Egmond said.

“We’re somewhat used to it, especially the girls from Perth. If it’s a hot day it’s going to be hot for both teams.

“It’s possibly [going to be an advantage for us]. It’s hot in Asia when we go there for qualifiers but we’ll see on the day.”