The Westfield Matildas have arrived back in Australia with coach Alen Stajcic declaring the side is on course to being world class team.

After qualifying for the Games with an unbeaten run of five matches in an intense 10-day qualification campaign in Osaka, the team are on a high.

The Matildas stats that show their dominance

How the Matildas qualified for Rio Games

But there’s no time to look back, said Stajcic at Sydney airport on Friday. He wants the team to take it to the next level now.

“They’ve put us on a good course to becoming a world-class team which was one of our goals we set a year ago," he said.

“And I think when the new rankings come out, we’ll be much higher up. I think we can beat all those teams [ranked above them].”

Part of the team’s next stage in development  is preparation, which includes negotiating players’ availability and FIFA windows in preparation for the Rio Games.

“We’ve got to get back to FFA hopefully next week. Hopefully we’ll get is sorted as soon as possible.

“But I”m sure FFA will support us. They have over the last two years so I’m sure we’ll get the support we need.” 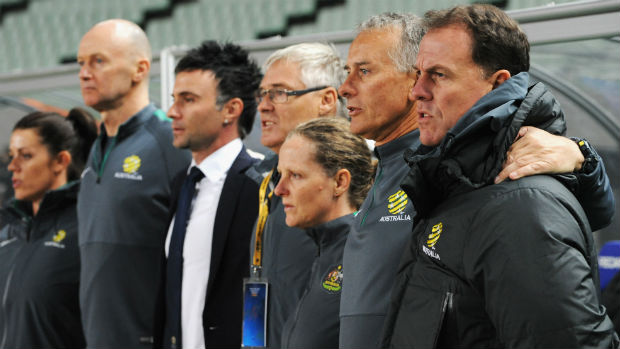 There is a two-week window before the Games which Stajcic can access the players.

"But I’d like three or four weeks with the players," added Stajcic. "It’ll be a bargaining effort with all the clubs around the world.”

Reflecting on the last two weeks of the team’s qualification for the Rio Games, Stajcic felt the 3-1 win over Japan was the best he’s ever seen the Matildas play. He likened it to how they played against the USA at last year’s World Cup.

“But this time, we did it over 90 minutes. Not just 45 minutes [against USA] which is a sign of the maturity of the team.

“That really set the momentum. It gave us a lot of confidence. It set the tone for the rest of the tournament.

“Such a tremendous effort against the odds and a grueling schedule, for the players to back up game after game is an unbelievable effort," he added.