Sam Kerr, the 21-year-old super striker for the Westfield Matildas, might possess searing pace, ooze confidence and show maturity beyond her years but getting a good night's sleep is another matter entirely.

While she is sure to be a major weapon for the Westfield Matildas at next month’s FIFA Women’s World Cup, she revealed how much her sleep patterns are out of whack.

“I have sleep paralysis. I get up in the middle of the night, I walk around, sleep talk, attack people in my sleep,” she told www.matildas.footballaustralia.com.au.

“I’m a terrible sleeper. I have all these weird dreams…it’s just a stress thing. I don’t know why it happens. 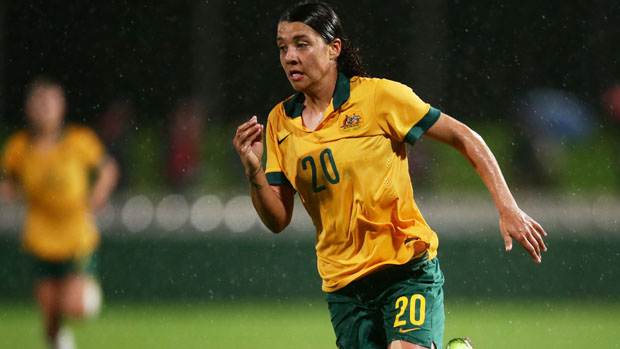 “When I hurt my knee [recently] and I was on crutches for seven weeks I had to sleep with my mum every night just in case I tried to get up.

“It’s something I’ve learned how to deal with. My room-mate [Caitlin Foord] is used to it now too and just laughs at me.”

You would forgive Kerr a few sleepless nights ahead of the World Cup, especially with the Matildas placed in the ‘group of death’ alongside heavyweights USA, Sweden and Nigeria.

But Kerr knows all about overcoming big hurdles to get what she wants.

She has battled serious knee injuries already during her young career and missed the last part of the W-League season with another setback.

Kerr has shown enormous resilience and character to get where she is now, on the cusp of a playing at a World Cup.

“You’re always a little worried when you’re injured on how you are going to come back,” she said.

“Especially with it being a World Cup year, there’s a thought about whether you can make it back in time but I had great support from the medical staff.

“I feel good and ready to give my best in Canada.”

Superstar Gorry reveals the fire that drives her

Football hasn’t always been in Kerr’s blood, with Aussie Rules her first love growing up in Fremantle.

Following in the footsteps of her dad Roger and brother Daniel, who played AFL with the West Coast Eagles, Kerr was happier chasing the Sherrin around until she was given no option but to change codes as a teenager.

“My dad and my brother gave me no choice….the boys were getting too rough,” Kerr explained.

“To do something that was a lot less contact, it was tough but I’ve grown to love it and now I wouldn’t go back. I saw the opportunities you have in football and it made the decision for me.

“There’s nothing for me in AFL for women and netball, I’m a little bit short. For a couple of years I wasn’t really doing it serious, I thought ‘this is stupid’ I don’t want to play.

“Then someone approached me to try out for the [Western Australia] state team and that’s when I started to get serious. I thought ‘there’s nothing in AFL for women’s football’ so I went down the path of soccer.

“I only really started to take it serious when I got called into my first national team when I was 14 for under-17s and haven’t looked back since.”

Asked how the side felt about taking on powerhouses USA, Sweden and Nigeria at the tournament, Kerr said: “We’re going in as the underdogs and Australians normally like that.

“We like that there’s no pressure and we can just go out there and be us. We’ve been training a lot and we’re really confident in our group.

“We’ve been together a lot more than other nations have over the last four months.

“The time we’ve spent together has given us a lot of confidence, we can see ourselves improve these last four months. We believe we can go as far as we want to at this World Cup.”