Not every footballer gets a perfect farewell when they call time on their career. Rhali Dobson came pretty close to the perfect send off.

It’s been a week since she announced her early retirement to be with and care for her partner, Matt Stonham. He was diagnosed with another brain tumour and after having that successfully removed will be undergoing aggressive radiotherapy and chemotherapy.

With emotions already high in her farewell game, Dobson got a goal, a win, and an engagement ring with Stonham’s proposal going global.

“I'm overwhelmed. I don't think everything's really sunken in yet, between my retirement and being engaged at the same time, it's just been a complete and utter whirlwind. And I went back to full time work on Monday as well.” Dobson told matildas.com.au.

The couple have returned home to Newcastle with Stonham beginning the next phase of his treatment.

“He's actually doing really well. He's all smiles and laughs and joking as per usual, he started his radiotherapy treatment yesterday, which doesn't have any effect on him at this time.”

While Dobson won’t be playing in the Westfield W-League, she certainly won’t be lost to the game.

“I'm still going to play locally here up in Newcastle just because I love sport. I still love the game. And it gives me that physical outlet as well. I'm such a competitive person, I can't see myself completely dropping out of the game at the drop of a hat.”

Luckily, her next team will ensure she gets to spend plenty of time with her fiancé.

“Matt coaches a team up here in Newcastle, we're actually out Maitland way, called the Bolwarra Bushrangers. So I'm actually playing in a men's competition up here and Matt's the coach. And it just gives us an opportunity to spend time together."

“I'm used to training with those boys the last couple of years anyway. I always trained with them once a week. And for me, it just keeps my head in the game in terms of playing within the community.” 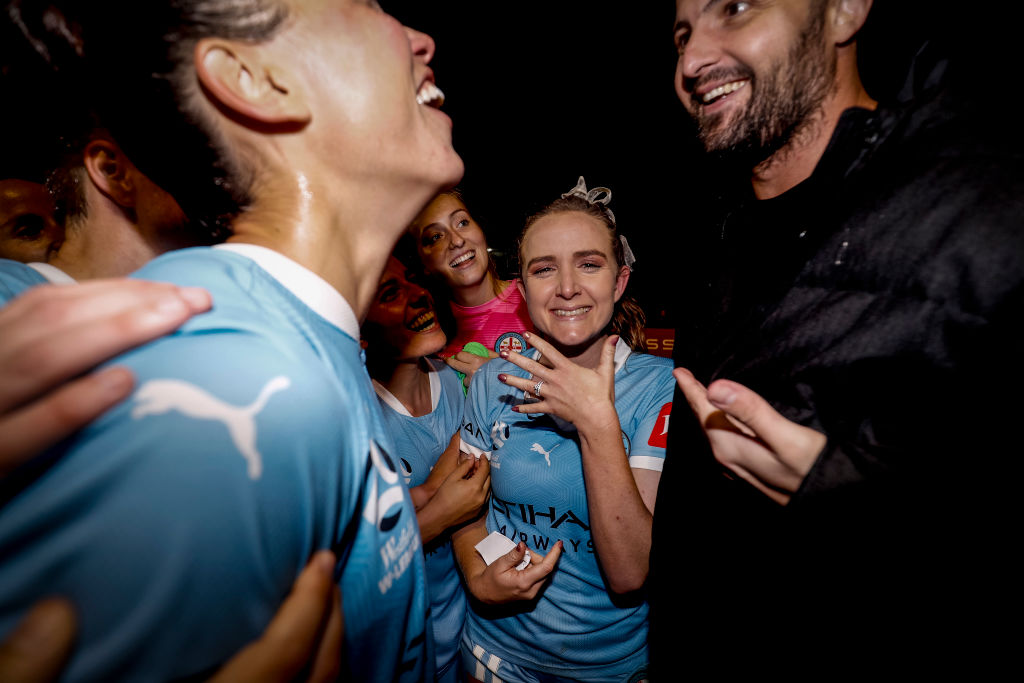 Off the field, Dobson is also continuing to work with the PFA on improving and progressing the women’s game – an area she feels passionately about.

In a Westfield W-League career that spanned 109 games over two clubs and 11 seasons, Dobson has seen plenty of change for the better and leaves with some incredible memories.

“My move to Melbourne City when I got that phone call on a Sunday night. Melbourne City reached out their hand. I was at rock bottom at that time, I was looking like I wasn't going to play in the game anymore.”

Her rejuvenation at City led to the ultimate success at club level.

“Winning my first W-League Championship and doing the three-peat with Melbourne City, that was a major, a major moment for me.” Dobson recalled.

She joined an exclusive club this season, notching up her 100th Westfield W-League appearance, becoming one of 30 women to achieve the feat.

“This season makes me so emotional. The 100th game was actually… I have no words, I actually do get stumped when I talk about it merely for the fact that it was such a long time coming. And there were so many times, particularly one time that I thought about leaving the game.”

“I've been there when I was getting no pay to one season where I got $200 for an entire season. And that was, you know, I was so excited. It just highlighted all the times I got knocked down, and I've got back up, which I think is common for a lot of athletes.

“But for me it was particularly emotional because I come from such a rural, country town. And they're so proud of me there. My parents have sacrificed so much and so have my four younger sisters.

“So it wasn't just about me, it was about an entire community, who have supported me through it all, and always promoted me without really knowing whether I was going to make it to the top or not. But they showed that they believed in me and that's what got me there.”

Dobson is also among the women to have played for their country; she is Westfield Matilda number 191.

“Making my Matildas debut was huge. I'd been in Junior Matildas, I didn't do any of the Young Matildas; I basically skipped that. And then getting that call up and playing against Brazil. That was huge.”

“I was supposed to be finishing up my final year of uni and I delayed it so I could put in the time and effort to be part of the Matildas and really worked my way into those playing squads.”

But the thing that stands out the most from her career are the people she has met. It was on a soccer field where she met her now fiancé, and it is through football that Dobson has created an incredible network of support and friendship.

“My friendships have been, you know, I have friends all over the world. When I got engaged, one of my close friends, Claire Emslie in England, she's playing for Everton, there was already a voice message on my phone because she'd been watching the game from over there. And she was congratulating me and so was Jasmyne Spencer over in America."

“So I have so many girls, and so many friends who have just been so supportive through not just my football career, but everything that's going on with Matt. And I'm just so, so grateful for all of them.

“They're probably the most important thing to come out of my football career in the W-League. Because they're the things that last forever.”