The Westfield Matildas have claimed an encouraging 2-1 win over DPR Korea in Auckland as the side builds towards June’s FIFA Women's World Cup.

Defender Clare Polkinghorne gave the Matildas the lead in a frenetic opening at Bill McKinlay Park, timing her run into the box from a corner and applying a thumping volley from close range.

The lead was short lived however, with DPR Korea finding the back of the net minutes later through Kim Yun Mi to sqaure the ledger at 1-1 after just 14 minutes.

Australia regained the lead before the break through Michelle Heyman after some good link up play from Elise Kellond-Knight and Westfield W-League grand final hero Ashleigh Sykes.

Kellond-Knight found Sykes inside the box with a delighful pass, who provided a neat lay-off for her Canberra United strike partner Heyman to fire home.

Coach Alen Stajcic made regular substitutions after the interval as he sought to give an opportunity to the majority of his 24-player squad for the tri-series.

Stajcic had selected 19-year-old striker Larissa Crummer to make her senior debut, while defender Hayley Crawford returned to the national fold after a decade long absence.

Despite both sides creating several opportunties there were no goals in the second stanza as the Matildas survived a late enslaught from the world No.7 to notch an impressive victory.

Stajcic was delighted with the result and the performance, particularly considering a number of players were making their first appearance at international level or returning after a substantial time out of the national setup.

“It was a great effort. We grinded it out towards the end when we were under pressure but it was a tremendous effort,” Stajcic said.

“The resilience and hard work was a stand out, there were some match winning moments throughout the game and the work rate, intensity and desire to chase back and defend the result was brilliant.

“There were four or five players either debuting for the national team or returning to the fold after time out of it so there were a lot of players playing for their spot and they all did really well. To have a lot of new players battle it out and get a result against a world class team was outstanding.” 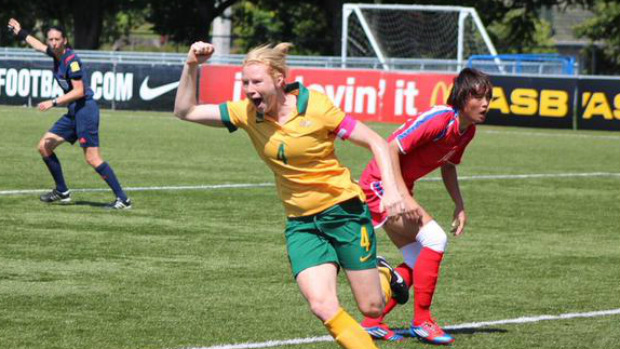 The Westfield Matildas are heading to the FIFA Women’s World Cup in Canada. To buy tickets to watch the girls in action click here.