Meet the Westfield Matildas in Melbourne this weekend!

The Melbourne sporting public will have the opportunity to meet the Westfield Matildas squad when the squad makes a special appearance at City Square in Melbourne’s CBD from 3.45pm on Sunday 5 June 2016.

The Westfield Matildas will arrive in Melbourne on Sunday afternoon ahead of their second match against New Zealand on Tuesday 7 June at Etihad Stadium.

All of the Westfield Matildas’ overseas based stars, including Kyah Simon, Elise Kellond-Knight, Emily van Egmond and Lydia Williams are back for the two matches against the Football Ferns in what is the last time the full team will be in Australia before heading to the Rio Games. 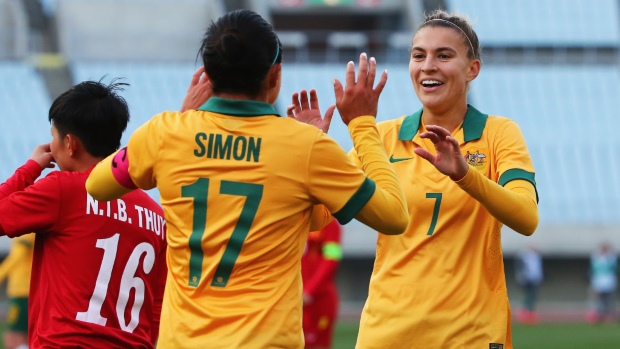 Fans will have the chance to get autographs and photos with the players, which include co-captains Lisa De Vanna Clare Polkinghorne and 16 year old sensation Ellie Carpenter, while there will also be a Q&A with selected players plus prizes and giveaways.

The Westfield Matildas squad is currently in Ballarat preparing for the first of the two matches against the Football Ferns to be played on Saturday 4 June at Morshead Sports Park.

Both matches will be LIVE on FOX SPORTS and ABC TV