Tameka Butt celebrated her 50th internationally cap recently in trademark fashion - with a goal - and now ‘Meeks’ is eyeing more glory for both Brisbane Roar and the Westfield Matildas.

Though still only 24, Butt feels like she has been around forever. Indeed the Gold Coast surfer is celebrating her ninth year in the Green and Gold at senior level. Always with an inclination for goalscoring, Butt netted in three successive Brisbane Roar Grand Finals, as part of a 41-goal Westfield W-League tally – the third best in the competition. Not bad for a player who is not an out-and-out striker.

With three AFC Asian Cups and two FIFA Women’s World Cup on her resume, the lively penalty box predator has achieved much already. Now after scoring in last week’s 1-1 draw against China, Butt is aiming for many more milestones.

Congrats on your 50th cap. How was it going into that match for you?
Tameka Butt: I just took it as another international. It was my first start for a while, since Brazil in the World Cup. And of course the goal was a cherry on the top. I didn’t really think about it at the time, but it is special definitely looking back.

Was there an extra vibe for you, and did the squad look after you?
I feel like every game feels good to put on the jersey. But to have 50 caps makes you feel good. I got some nice flowers and a speech. A small reception is all I need.

Did you imagine when you started out your journey that you might reach this landmark?
It was definitely always a goal of mine. I was never sure when it might happen. There are great players coming through all the time, so you are never sure of your spot. It was always a goal when I started playing, but hopefully another 50 now. But I think my body is a bit older than my age!

Takes us through the goal against China?
It was pretty early in the game. We had some good combination play from the back. Heyman got the ball in behind and it was a perfect pass, so it was a fairly easy finish. Left foot, side-foot.

How did you enjoy being back in camp?
All the girls were so happy to be back together training and playing internationals again. We had some good stories and reminisces about Canada.

What are some of the career highlights for you?
Definitely winning the Asian Cup in 2010. Getting 50 caps is another, and scoring as well. 2011 World Cup, and of course 2015 World Cup so there is more than a few!

And how are things at the Roar this year with quite a different squad?
We have definitely come together a fair bit since last year. We have stripped the team back and regrouped, and I’m really enjoying the season so far. 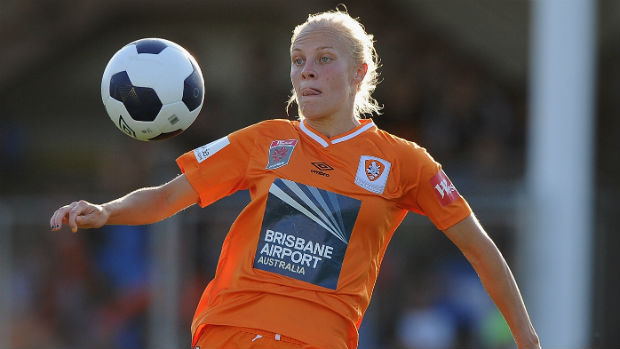 A disappointing loss on the weekend at home to Adelaide…
Yes, we had a loss this weekend but I don’t think that will hinder us too much, and we will move forward. We are dealing with a couple of injuries. The things that went wrong are things we can definitely fix.

How is the vibe this year?
Definitely we need to do better than last season. We have some fresh faces, some that are brand new, and some that are from back when we won the championship. From day one when we came into pre-season, everything was different. And now going to training is the highlight of our day.
Find out more
Download Now