“A lot of people don’t know this but one side of my family is American,” Williams revealed to www.matildas.footballaustralia.com.au.

“My mum’s American and my dad is indigenous…it’s a bizarre combo I suppose.

“But it’s great because I’ve had both sides of the spectrum. I get to celebrate American holidays but my life is also in Australia. I grew up with two pet Kangaroos as a kid.

“I’ve still got my grandparents, a few cousins and aunts that are still in America and the rest of my family are in WA.

“My grandfather is in his 90’s in the US and he Skype’s me all the time. They might be in America but they are all going for Australia in that first game for sure.”

And Williams looms as a key player for the Matildas if they are to cause and shock and get off to a winning start against the highly-fancied Americans.

Heading into her third World Cup at 27-years-old, Williams is likely to be Alen Stajcic’s first-choice ‘keeper at the tournament.

A remarkable effort just 10-months after going under the knife for a second knee reconstruction. 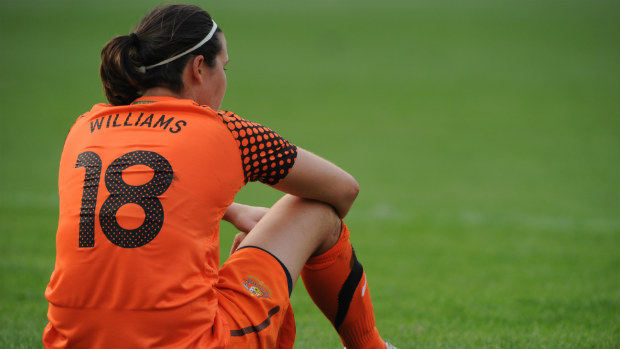 It’s taken resilience, hard work and a love for sport for Williams to make it back so quickly. Something she learned growing up in the dusty sports fields in Kalgoorlie as a youngster.

“I started sport just kicking it barefoot playing with indigenous kids in the middle of the desert,” Williams explains.

“We just loved the game and loved playing all day. I had that growth coming through to just enjoy what I’m doing all the time.

It was a move across the country to Canberra at 11 years of age where football became more of Williams’ game, becoming a full-time goal-keeper three years later.

She idolized Danish and Manchester United legend Peter Schmeichel, admitting she molded her game on the exceptional – and at times crazy – gloveman.

“Just his presence and everything he did I really loved. Once I cross that white line I’m a bit of a different person or character. It’s pretty much life or death when you’re playing, especially as a goal-keeper,” Williams said.

“You need to make sure everyone is on their game. I’m definitely a different person in goals but I don’t take anything off the field.”

Williams believes this Matildas squad is the strongest they have ever fielded at a World Cup, which gives them a huge chance to go deep into the tournament.

“It’s a hard group but what’s the point of playing a World Cup if you’re not against the best countries in the world,” she said.

“I think we have a really good chance of getting through and making a difference in football in Australia as well.

“We have high expectations within the group and we’re looking positive for the (knockout phase). It’s definitely going to be one game at a time and one 90 minutes at a time.

“The future is looking really bright. We just have to use our potential to the maximum.”