The Westfield Matildas have helped to officially open a new synthetic field in Vancouver as the countdown continues to the start of the FIFA Women’s World Cup 2015™ Canada.

The Westfield Matildas became the first team to train on the brand new facility as co captains Clare Polkinghorne and Lisa De Vanna helped to cut the ribbon to officially open the new field at Empire Fields together with the Vancouver Park Board.

The squad was also greeted by Schueme, the official mascot for the tournament, as the excitement builds ahead of the opening match between host nation Canada and China on Saturday 6 June.

The Westfield Matildas, who will open their World Cup campaign against the USA on Monday 8 June (local time), will fly to Winnipeg (the venue for their opening match) on Thursday. 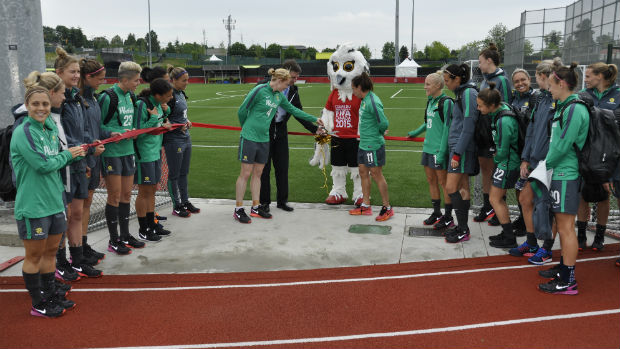 Defender Alanna Kennedy, who is one of 10 Westfield Matildas in the squad to be competing at her first FIFA Women’s World Cup, says the realisation of the tournament being less than a week away has firmly struck the players.

Kennedy spoke about the excitement of the FIFA Women’s World Cup being just around the corner, the benefit of the squad having a pre tournament camp in Vancouver, the adjustment to playing on synthetic fields, the team being ready to be at their best against the USA, and dealing with the expected crowd of 30,000 for their World Cup opener in Winnipeg.

"Obviously being over here in Canada we're starting to feel the vibe of the World Cup and more people are arriving so obviously once we head to Winnipeg we'll be in the atmosphere and we're really looking forward to June 8," said Kennedy.

"It's been really beneficial (spending time in Vancouver). We've been acclimatising to the weather and it's been great to get a few more games under our belt against New Zealand and China so hopefully we'll be ready to go.

"It was exciting to cut the ribbon (for the opening). Obviously the artificial is a little bit different to the grass, it's harder, the ball travels differently, the bounce. So we'll be looking to use that to our advantage and adjust to it well come the World Cup."