The Westfield Matildas and forward Kyah Simon both feature in categories of the ‘I Support Women in Sport’ Awards. The winners are decided by the public so get voting for Simon and the girls!

This year marks the fifth annual I Support Women in Sport Awards, an initiative of Australian Women’s Health Magazine.

The Westfield Matildas and Simon have both been nominated in separate categories alongside four other nominees for their respective awards.

​Click here to vote for the Westfield Matildas and Kyah Simon.

Simon is nominated in the ‘Local Heroine’ category, which recognises a female athlete who is celebrated in her hometown for her involvement both on and off the playing field. Heralding from Sydney’s western suburbs, Simon had a memorable 2015 FIFA Women’s World Cup in Canada, scoring three goals to help the Westfield Matildas reach the quarter finals.

Meanwhile, the Westfield Matildas are nominated in the only team award category, the ‘A-Team of the Year’, the criteria for the award described as ‘an awesome bunch of chicks who’ve kicked some serious butt in the sporting world’. Drawn into the Women’s World Cup’s ‘group of death’ alongside eventual champions USA, top five nation Sweden and the much improved Nigeria, the Westfield Matildas defied the experts by finishing second in the group behind the USA.

The Westfield Matildas then went on to record a historic win over Brazil in the Round of 16 before being edged out in the last 8 by Japan. Alen Stajcic’s team won significant respect from the football world for its performances and was one of only two teams to score against the USA at the tournament.

Further to Simon and the Westfield Matildas receiving nominations, 13 year old Canberra school girl Claire Falls who played an integral role in the resurrection of the Pararoos and an ambassador for women’s sport, has also been nominated. Falls has been nominated in the ‘Contribution to the Community’ category as a female who gives back to her suburb and uses her influence to change the world.

The Westfield Matildas, Simon and Falls all face some stiff competition in their respective categories from a host of worthy nominees, so make your vote count.

Voting is easy so click here to vote and support Kyah, the Westfield Matildas and Claire Falls. Voting closes on 27 September 2015. 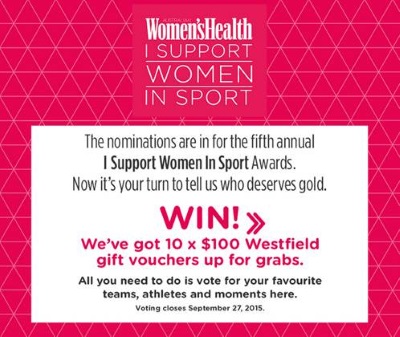