The second round of the FA Women's Super League saw some big results and strong performances from the Westfield Matildas contingent.

These are three talking points from the weekend.

For the second week running, Arsenal demonstrated their attacking riches as they defeated West Ham United 9-1.

After a tight opening 20 minutes between the Hammers and Gunners, Arsenal pulled away late in the first half with a number of quick goals.

That set them up for an even more productive second half with Caitlin Foord getting in on the scoring action.

Foord netted her first league goal for Joe Montemurro's side and the manager was once again pleased with her impact off the bench.

"Caitlin is working so hard in training, she's just missed out on the starting eleven due to the great start we've had," he said post match. "I've discussed this with Caitlin quite a lot but we just want to start building her rhythm and her confidence."

I'm so pleased with her and she's going to take this league by storm, whether it's coming off the bench or whether she's starting, she is already showing those qualities."

The one sour note to the Gunners' victory was the early substitution of Steph Catley.  Earning her second league start, Catley copped a hit to the back with the defender going down painfully in the 12th minute.  Although play resumed, she was subbed out in the 20th minute.

"Coming into the international break she should be fine and back to training this week and rested and ready for the upcoming games."

The Toffees continued their bright start to the season with a hardworking 1-0 win over Tottenham at home.

While she didn't get on the scoreboard, Hayley Raso continues to gain admirers for her efforts on the wing.

The Westfield Matildas forward caused problems for the Spurs defenders throughout her whole 90 minutes.  Her intent was evident early as she forced a good save from Spurs' Rebecca Spencer in the opening minutes and from there on was sharp in her 1v1 and link up work.

Chelsea shake it off

Following a 1-1 draw with Manchester United in Round 1, questions were asked of the defending champions during the week and, unfortunately for Bristol City, they came out in the second week to answer them resoundingly.

From the opening whistle the Blues were in control at home and Sam Kerr was involved in a lot of the attacking action as Chelsea produced nine different goalscorers in their 9-0 win.

With a fast start from their title challengers, goal difference may prove a factor later in the season and Emma Hayes' side proved ruthless for the 90 minutes.  Kerr topped off a busy performance with a goal in the 85th minute to ensure that the Blues enter the international break full of confidence. 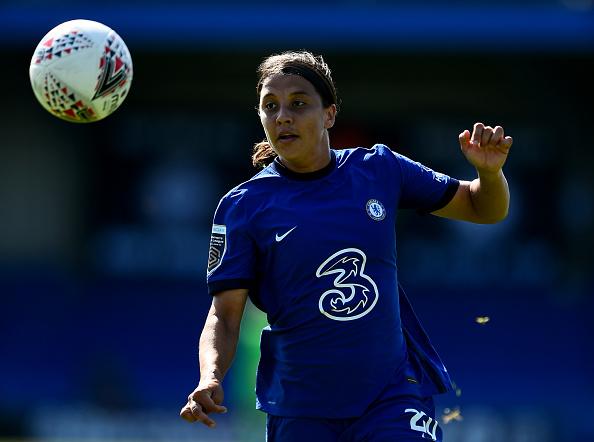