FFA CEO David Gallop has lamented the fact that the Matildas will not play world champions USA due to a CBA dispute with the PFA which he says largely centres on male footballers, a situation he described as “preposterous”.

The Westfield Matildas were due to fly out to the USA on Friday for an important two-game series in front of huge crowds and TV audiences in the US.

In the context of their preparations for Rio Olympics 2016 qualifiers early next year, these games would've been vital.

However Gallop confirmed the US tour was off for the Australian national team and explained why he was disappointed with the PFA and their role in a dispute he said was primarily centred around male footballers in the Hyundai A-League and Socceroos.

“The reason it [the two-game tour of USA] won’t be going ahead is because the FFA and PFA have been unable to reach agreement regarding the A-League salary cap position,” he told reporters in Sydney on Thursday afternoon.

“And the extraordinary demands that the PFA have made in relation to the A-League salary cap has found the Matildas caught up in something they shouldn’t be caught up in.

“For them to get caught up in wage claims for our male professional players to me is bizarre.

“They should be on that plane tomorrow. To me it’s nonsense.” 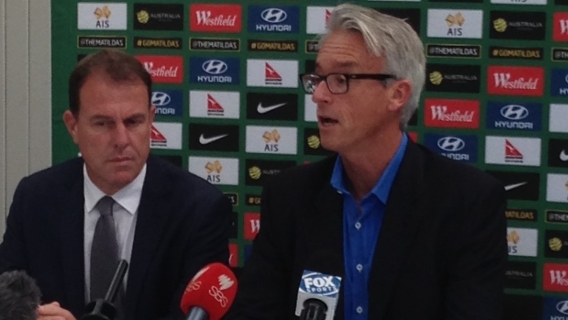 Gallop said he’d met with PFA boss Adam Vivian on Thursday upon which he tabled to him a fresh offer in relation to the Matildas.

“This would have seen the Matildas get paid for a two-month period, and also receive their World Cup prize money,” he explained.

World Cup prize money is not due till the end of this month, but Gallop said FFA would bring that payment forward.

“They will still receive their World Cup prize money, but what happened today was quite extraordinary because effectively we’ve been told – and we were told this earlier in the week – that unless we meet a wage claim of some $120m, the bulk of which will go to male professional players in the next four-year period, unless we agreed that, then the Matildas wouldn’t be participating against the USA.”

“It’s quite preposterous,” he said.

The FFA CEO also hailed star player Lisa De Vanna’s stance on saying she wanted to play for her nation against the world champions.

Matildas coach Alen Stajcic also fronted the media and said it was disappointing that the team would not have valuable time together.

“That is plain and simple,” he said.

He explained that talk of a salary cap freeze was “nonsense” explaining new allowances that have been introduced into the system around long-serving players and salary cap credits.

“Salary cap allowances are increases in payments to players so the suggestion of a freeze is absolute nonsense.”