A second-half brace to Caitlin Foord has sent Sydney FC into a top-four position for the first time in weeks, following a 3-0 victory over Western Sydney Wanderers on Thursday night.

Sofia Huerta opened the scoring just before half-time, capping off a sensational solo slalom with a shot into the top-right corner.

Caitlin Foord added spark to an already fiery encounter, dribbling more than 25 metres before unleashing a rocket from outside the box.

And then the victory was complete when, after Caitlin Jarvie brought down Ibini in the box and earned herself a red card, Foord took the ensuing penalty to grab her brace.

The win was Sydney's second consecutive 3-0 derby success over their crosstown rivals, and puts Ante Juric's side right in the mix with three rounds remaining in the Westfield W-League.

Western Sydney started the stronger of the two sides and came within inches of a sensational opener, but for some acrobatic goalkeeping by Aubrey Bledsoe.

Lo’eau Labonta, having seen Bledsoe off her line, launched a long-distance strike from more than 30 metres out, but was denied by her compatriot. A back-tracking Bledsoe tipped the ball onto the crossbar, keeping the scores level after 12 minutes. 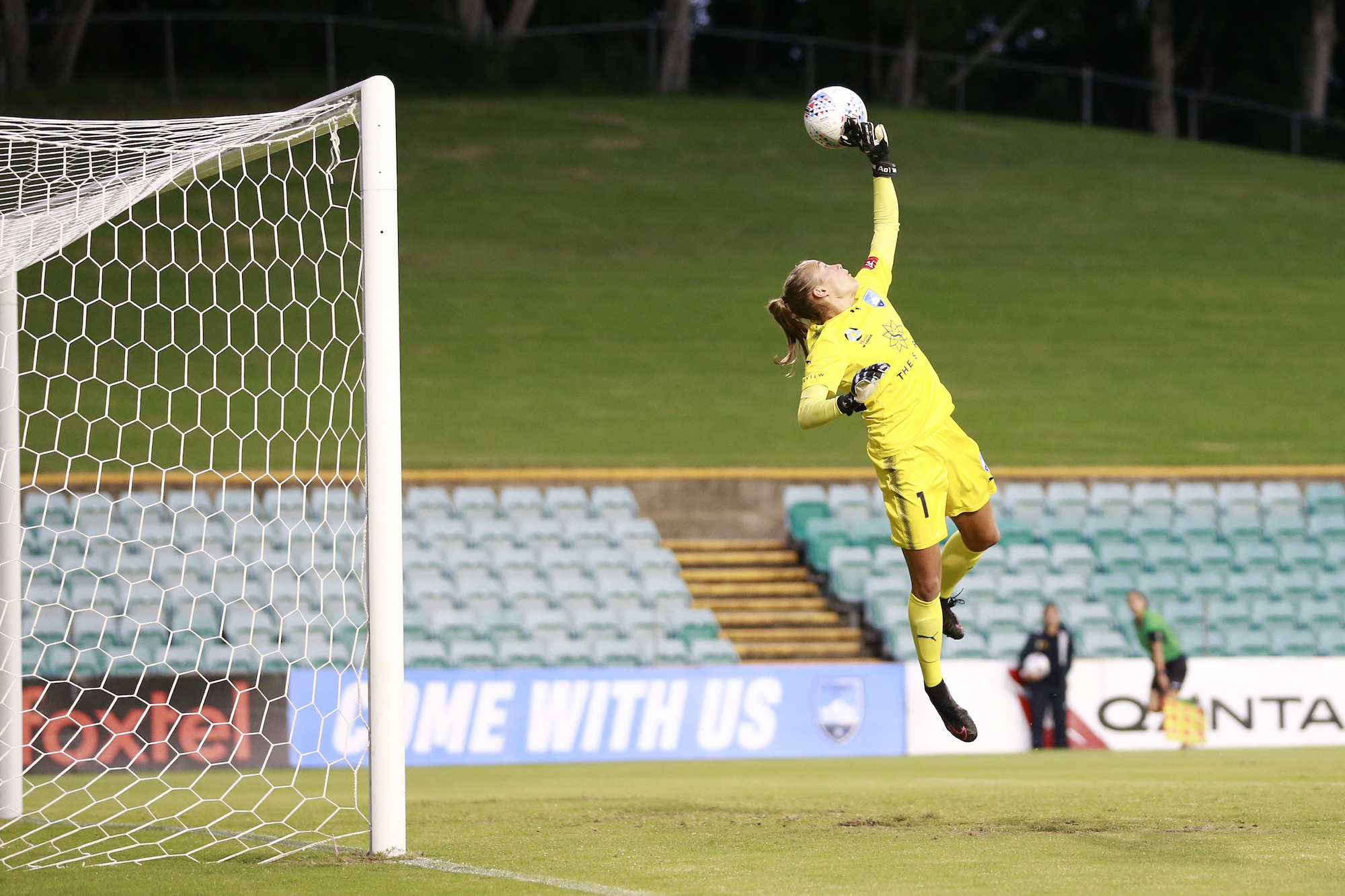 Four minutes later, Taylor Ray sustained what appeared to be a serious injury after her left leg dug into the turf and she twisted her knee. After a brief stoppage in play, the 17-year-old was substituted.

Juric’s side turned the screws following that brief stoppage, making repeated incursions into the Wanderers’ box, during which they had a shout for a penalty.

Princess Ibini fired a shot which appeared to strike Servet Uzunlar’s hand, yet the referee waved away any appeals.

Sydney’s growing dominance would forecast the Derby’s fiery opener on 40 minutes when Huerta received a throw-in deep in Western Sydney’s half.

At the edge of the box, and with seemingly nowhere to go, the import danced, beat two defenders, and gave herself space inside the box.

With eyes only for goal, Huerta smashed a bullet of a shot at the near post past Nicole Simonsen and into the top corner. 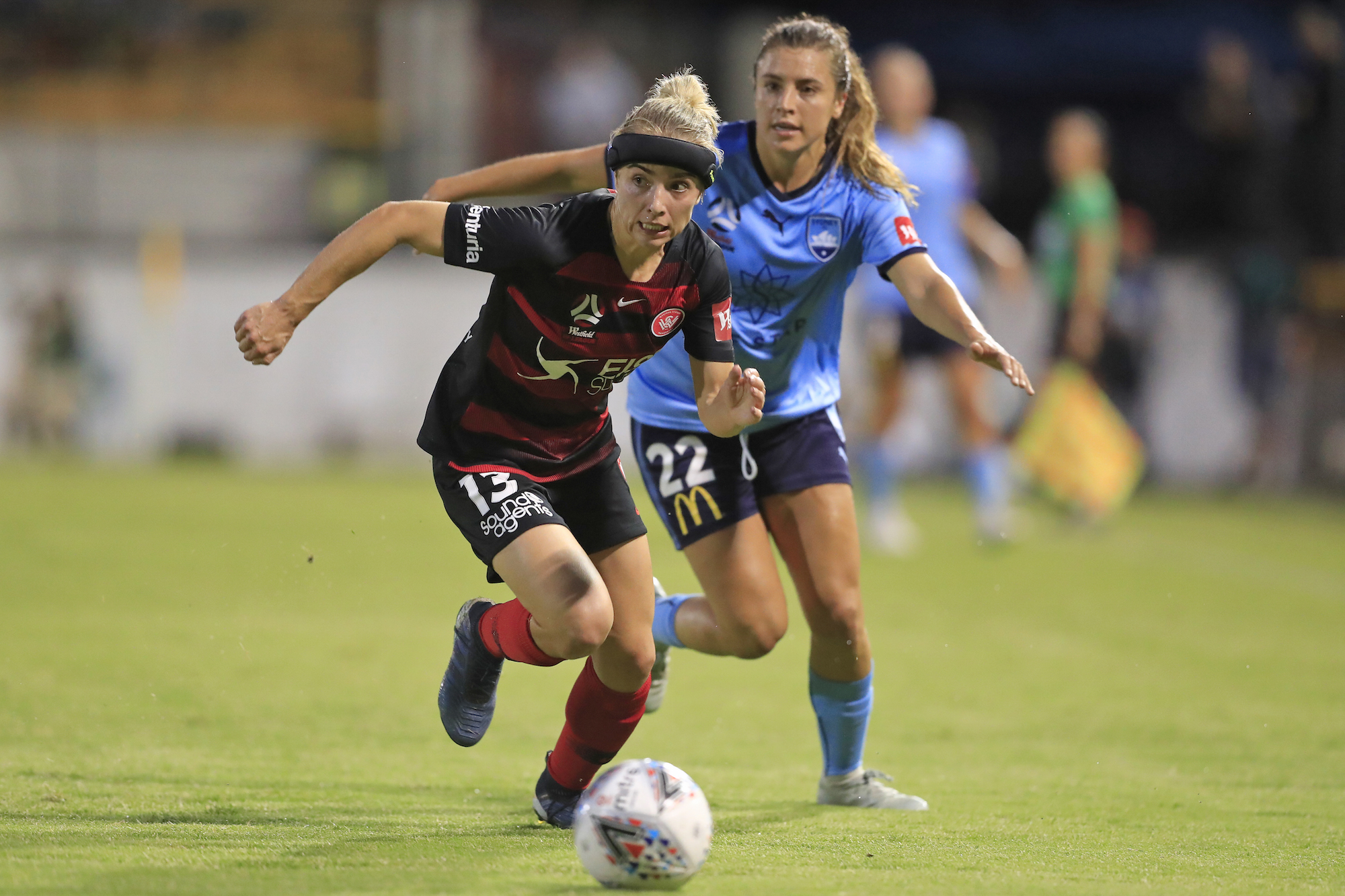 Despite being 1-0 down, Western Sydney were unable to threaten Sydney FC in the opening stages of the second half.

Ibini climbed highest from a cross, her header striking the top of the crossbar and coming within inches of doubling the Sky Blues' lead.

Such a chance served as a warning shot because 10 minutes later, on 64 minutes, Foord would find the back of the net in some style.

The Westfield Matildas forward received the ball just inside the opposition half, before dribbling more than 25 metres to the edge of the box.

Getting the ball out of her feet, she fired a venomous right-foot drive into the top-right corner for her sixth goal of the 2018/19 Season.

Substitute Caitlin Jarvie would make a telling contribution on affairs, albeit for the wrong side.

Having entered the field on 62 minutes, she was off for an early shower seven minutes later after bringing down Ibini in the box who was one-on-one with the keeper.

Foord cooly slotted home the penalty, grabbing her second of the night and Sydney FC's third.

It was a memorable night for more reasons than one for Sydney FC. Shay Evans made her debut for Sydney FC, coming on in the 82nd minute, becoming the first ever female footballer from Borroloola, Northern Territory to play in the Westfield W-League.

The win takes Sydney FC temporarily into the top four, and in with a real chance of featuring in the Westfield W-League 2019 Finals Series, while Western Sydney Wanderers remain winless at the bottom of the ladder.