The Festivities began on Friday 9 October when the Lisa and Lydia visited the Nakara Primary School in Darwin where they met 150 girls aged between 6 & 12 years. After some opening speeches from Lisa and Lydia in regards to being professional female football players, the schoolgirls had a chance to ask Lisa and Lydia questions which ranged from “What were some of the challenges you faced as a young girl?” to “Do you have any advice ln how I can play for the Matildas one day?”. Once the Q & A was over Lisa and Lydia conducted a mini skills clinic on the school football field.

The next day, the official “FIFA Live Your Goals” Festival kicked off at the Darwin Football Stadium where over 100 local female footballers had a chance to learn from Lisa and Lydia along with former Matilda and FFA Women’s Football Development Manager, Sarah Walsh, and local Northern Territory Football Development officer, Sarah Willington. From 9 in the morning to 3 in the afternoon, under the Northern Territory heat and humidity, the players were put through their paces and loved every minute of the action. At the end of play all the girls got the opportunity for some one-on-one time with their heroes and left with an autograph. 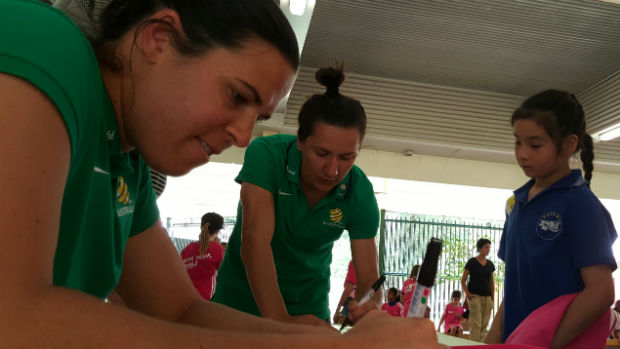 Speaking at the event, Matildas captain Lisa De Vanna was honoured to be a part of the first FIFA Live Your Goals Festival in Darwin.,

“It was a really great day, all the young girls were very excited to meet myself and Lydia,” said De Vanna.

“We joined in on their sessions and gave them feedback where we could.

“It’s so important for me to be involved in these Festivals as I relish the opportunity to give back to the grassroots as it meant the world to me when I was able to meet my idols as a young footballer,” concluded De Vanna.

Sarah Walsh was equalled pleased with what the event achieved.

“The FIFA Live Your Goals Festival empowers and inspires young girls to meet their full potential on and off the field. The young females who attended the Festival in Darwin on Saturday will each take something different away from the experience, hopefully that experience will give them the confidence and motivation to follow their dreams like their heroes”

The “FIFA Live Your Goals” Festival in Darwin was made possible through FIFA funding and with the support of the Northern Territory Football Federation.