ABC TV football presenter Stephanie Brantz is backing the Westfield Matildas' attacking stars to help the team go deep into next year’s FIFA Women’s World Cup, if they can get a favourable draw on Sunday morning (AEDT).

Alen Stajcic’s squad will find out which three sides will be in their group for the tournament in Canada in June when the official draw is held in Ottawa on Sunday morning from 4am (AEDT).

The Westfield Matildas will head to the tournament as one of Asia’s great hopes to do well, along with reigning World Cup winners Japan who defeated the Aussies in the Asian Cup final earlier this year.

Brantz knows plenty about the women’s game both in Australia and abroad due to her major role as part of the ABC’s coverage of the Westfield W-League.

She is confident the Westfield Matildas have the talent to shock the world but has her fingers crossed they can avoid some of the tournament’s big guns when the balls are drawn this weekend.

“Teams like the US are very strong and they’re still number one. Then you have a look at some of the European sides they are incredibly powerful and quality football sides,” Brantz told www.footballaustralia.com.au.

“And then you look in our own backyard at team like Japan, they are no easy beats. You really want to avoid teams like that.

“Alen Stajcic will take whatever draw we get but he’ll hope for a friendly draw and sides that play similar football to us.

“It’s a well-worn cliché but at a World Cup there are no easy teams in the women’s competition, we saw that even at the Asian Cup. You need to bring you’re A-game or you won’t win.

“I’m confident the girls will do well. Staj knows them inside out, has been coaching a lot of the since they were junior players so there’s no reason why they can’t go deep into the tournament.”

The Matildas will head to the tournament with Asia’s best player in their ranks following Katrina Gorry’s exploits at the AFC awards in Manila this week. 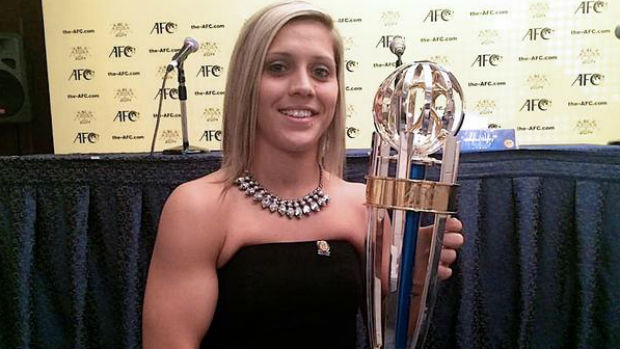 The pint-sized midfielder has enjoyed a stunning season and is the side’s chief playmaker but Brantz believes there is a real strength right throughout the squad.

“Gorry has been amazing for the Matildas. You would have seen her great goal for Brisbane Roar (in the W-League) on the weekend and we look forward to seeing her do more of that in the World Cup,” she said.

“It’s great to see Kyah Simon back and hopefully she’ll come back through to full fitness and there’s a couple more really impressive players.

“Staj has got a side that has a lot of youth coupled with some hugely experienced players. If you look at that Perth Glory squad there will be a lot of players from there so I think it’s a good mix and an exciting mix.”

With the men’s AFC Asian Cup in Australia in January, the Westfield W-League season will finish before Christmas.

While it means a number of the squad won’t be involved in consistent matches early in the New Year, Brantz believes the extra-time training as a squad will be beneficial for the squad.

“When he (Stajcic) takes them into camp he’ll have a solid amount of time where they don’t have any other distractions and that will be good,” Brantz said.

“There are some fascinating young players coming through which is so exciting. Your Caitlin Foords, Steph Catleys have been in the squad for a little while but are still so young.

“Then you’ve got your fringe ones that you see coming through in the Young Matildas like Beattie Goad, Alex Chidiac, those girls are coming through the NTC program and will be stars of the future and go gang-busters.

“Whether he (Stajcic) can balance that with the maturity of the other players and build a really strong spine of a team that can be effective in Canada, we’ll see but it will be exciting.”
Find out more
Shop now