Australia through to quarters after Thai win

Australia has qualified for the quarter finals of the AFC Asian Cup after a nervy, but in the end convincing 4-0 win over a gallant Thailand in Bangkok. Captain Mark Viduka scored twice, with one apiece from Michael Beauchamp and Harry Kewell.

Australia has qualified for the quarter finals of the AFC Asian Cup after a nervy, but in the end convincing 4-0 win over a gallant Thailand in Bangkok.

The match was still in the balance with 10 minutes to go with Thailand desperately trying to draw level and putting Australia-s re-shaped defence under enormous pressure. But up stepped the captain to calm nerves with a brilliant solo effort to put the Socceroos two up and knock the wind out of the Thais sails and they went on with it and added two further goals.

It will be a match to saviour for coach Graham Arnold and his team after a tumultuous three days in which he and the squad have had to fend off allegations of rifts in the camp, which only added to the poor form shown in the opening two matches.

After the two opening poor performances, Arnold made four changes to the starting line-up and also decided to revert to a 3-5-2 formation, with John Aloisi partnering Mark Viduka up front, Mark Milligan and Michael Beauchamp coming into the defence for Lucas Neill (suspended) and Patrick Kisnorbo, while David Carney came onto the left side of midfield with Brett Holman dropping to the bench.

The players were helped by the later kick-off and rain falling before and during the match and started the match looking fresh, sharp and committed.

Viduka and Vince Grella had early chances, with Viduka having a clear sight on goal, but couldn-t get enough power on his left foot shot, while Grella hit a long range volley over the bar.

On eight minutes, Mark Schwarzer was nearly embarrassed by a cross from Sutee Suksomkit that curled wickedly just past the far post top corner.

However Australia-s early endeavour was rewarded in the 21st minute, when Michael Beauchamp powered in and headed home a Luke Wilkshire free kick for his first international goal.

Not content with one, Australia continued to attack the Thailand goal with Aloisi heading over a Bresciano cross, while Viduka tried a long range shot that went over the bar.

In the dying minutes of the half both sides had chances with Aloisi denied by a desperate lunge by Saiwaeo as he was set to pounce on Wilkshire-s brilliant cross. While up the other end, Sutee was wide of the near post from a free kick that had Schwarzer beaten.

Wilkshire, moved from left back to a more familiar right midfield role, should have had Australia 2-0 up seconds into the second half when he advanced on the Thai goal, but blazed his shot over the bar.

Eight minutes later, he had another terrific opportunity when teed up by Bresciano, only this time, his placed shot was hit straight at the keeper.

From then on, it was backs to the wall for Australia, as Thailand lifted the tempo and had Australia under enormous pressure, with right fullback Suree Sukha particularly dangerous.

But led by a brilliant display from Sydney FC defender Milligan, Australia kept the Thais at bay, who were mainly forced to shoot from long range, although several crosses caused some concern before being cleared.

Then came the classic sucker punch in the 80th minute, when a rare foray forward by Australia, saw substitute Tim Cahill cross to Viduka, who chested the ball down and held off two defenders to give himself room to shoot. His shot beat the keeper and cannoned into the goal off Sukha, which effectively killed off the game as the Thais became instantly deflated.

With Thailand-s enthusiasm for the battle now over, Australia went for the kill and Viduka made it a brace four minutes later when he headed home Cahill-s cross from the right.

After a Brett Holman miss from right in front, it was left to Kewell to add the finishing touch to a memorable night for Australia, when he raced 30 metres from the right touchline into the penalty box and finished with aplomb and send the vocal band of Aussie supporters into raptures.

The team will now head to Vietnam tomorrow for Saturday-s clash with Japan, who were in ominous form earlier in the day, thrashing Vietnam 4-1 to top Group B.

In the other group A match, Iraq and Oman played out a 0-0 draw, which means Iraq finished as group winners and will meet Vietnam in the quarter finals.

Ellie Carpenter: ‘I give everything when I’m wearing this jersey’

When Westfield Matildas defender Ellie Carpenter received her package containing the new 2020 National Team Nike Kits, she had a moment of anticipation and she wasn't disappointed.  "As soon as I got the delivery, I was so excited to open it," Carpenter said. "I think it lo 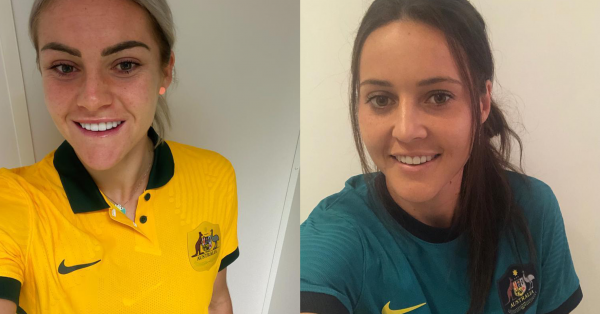 Customise your Facebook Profile pic with our new Nike jerseys