Former national team striker Sarah Walsh offers her take on what we learnt after Australia's 2-2 result against Germany at the Games.

One thing we learnt is that we are a fantastic team in transition - we can hurt teams on the counter with our pace up top and the quality we have in the attacking third.  Not many teams can deal with our pace up top and Alen Stajcic’s game plan of maximising that part of our game hurt Germany  - our attacking threats worked really well. We had many opportunities, especially in the first half.

Caitlin Foord was outstanding up top

Not only can she bring the midfield into game but Caitlin is one of the best strikers going around. The more time she can spend up there the more she’ll cause damage against opposition teams.  What a performance. 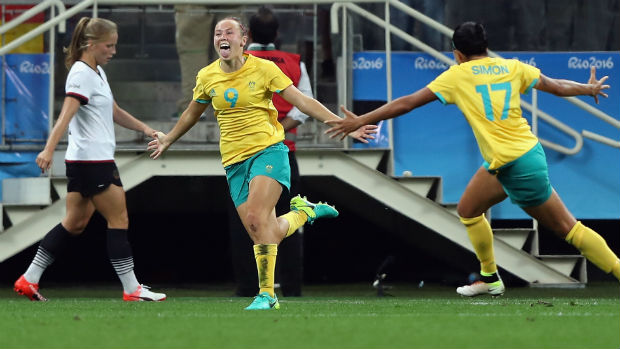 As a unit our defence did much better. Germany threatened in patches but we limited them to shots outside the box and we were able to deal with anything that was played around our defence. Obviously it was disappointing to concede late on but overall we looked more solid down back.

The Aussie underdog mentality suits us and you could see it in this game. We needed to get a result. It was a good performance and it’ll be a morale booster. Now the team’s in a good place mentally to face Zimbabwe next in the group in the final game with a chance to go through to the knockout stage.

We have some momentum but most importantly we need to put in a performance against the African nation to build confidence and keep that momentum going should we face one of the top three teams in the knockout stage.