In addition, ALDI will also be an Official Partner and the Official Supermarket of the Westfield W-League.

ALDI will replace AIA Vitality who were the inaugural official naming rights partner of the MiniRoos since 1 January 2015.

The partnership between FFA and ALDI is for a three-year period, in the Supermarket category, with an option to extend at the end of the term.

FFA CEO David Gallop today welcomed ALDI to the suite of FFA partners and believes the sponsorship has perfect synergy and is a strong indication of the power of grassroots football in Australia.

“To have one of the Top Ten retailers and one of the most popular Supermarkets in Australia join FFA as a corporate partner is an occasion to celebrate,” said Gallop.

“We believe that there is natural fit between ALDI and MiniRoos football.

“Since MiniRoos was launched two years ago we have rolled it out nationally to over 215,000 boys and girls.

“With the support of ALDI I’m sure that we can continue to increase the number of kids experiencing football and we look forward to working closely with ALDI in relation to the MiniRoos and Westfield WLeague competition. 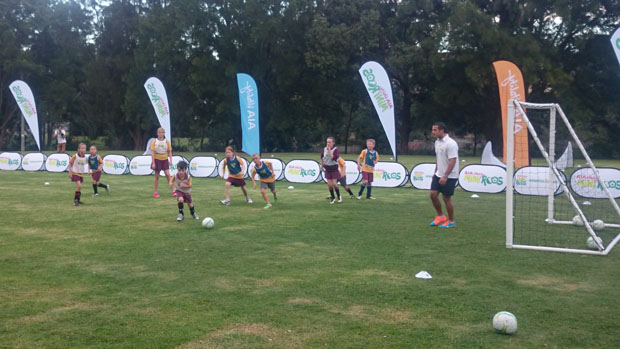 “I would also like to take this opportunity to thank AIA Vitality for partnering the MiniRoos for the past two years. During that period, AIA Vitality helped bring the partnership to life with activities such as the AIA Vitality Clubhouse and AIA Vitality MiniRoos Club Grant,” concluded Gallop.

An ALDI Australia spokesperson, is excited that ALDI will be the official naming rights partner of the MiniRoos.

“ALDI Australia is thrilled to partner with the FFA and the MiniRoos as the official Supermarket sponsor.”

“Our commitment to growing the MiniRoos extends both on and off the field. We aim to inspire healthy eating and demonstrate ALDI’s commitment to the Australian community,” said an ALDI Australia spokesperson.

Designed for girls and boys of all abilities, aged 4 – 11 years, the nation-wide initiative uses short, game-based sessions to introduce the sport of football to newcomers in an inclusive way. It focuses on learning new skills, being active, making life-long friends and, potentially, unearthing the next generation of Caltex Socceroos or Westfield Matildas.